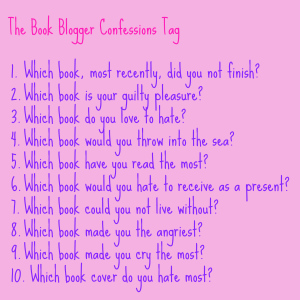 Here are the rules:
1.  Answer all the questions truthfully.
2.  Tag five other book bloggers!

Thank you so much Tia at Read It Write Now for tagging me all those months ago!  Sorry, I’m just getting to it now!

1.  Which book, most recently, did you not finish?
– That would be Extras by Scott Westerfeld.  It’s the fourth book in the Uglies trilogy.  That’s right, you heard me.  The author wrote ANOTHER book after the trilogy ended and I just couldn’t read it.  That was quite a while ago though back in December of 2013 and I’ve finished all the books I’ve gotten since.

2.  Which book is your guilty pleasure?
– Heir of Fire by Sarah J. Maas for sure… also, Bitterblue and Fire by Kristin Cashore!  I just can’t resist picking them up whenever I have the time!

3.  Which book do you love to hate?
– Ah… I don’t really have one for this.  If I hate a book, I hate it with everything I’ve got and then I will never again force myself to read it and endure the torture.

4.  Which book would you throw into the sea?
– The Elite by Kiera Cass!  That book just infuriated me and it would be a great stress-reliever if I could throw it into the ocean!

5.  Which book have you read the most?
– Besides children’s books from when I was 5?  Probably Don’t Breathe a Word by Holly Cupala.  I loved that book and wouldn’t stop reading it (I still won’t!).  Right behind that is Heir of Fire for sure!

6.  Which book would you hate to receive as a present?
– No book!  I believe all books have something to offer even if I hate them.  I would even welcome textbooks – hey they’ll help me learn!

7.  Which book could you not live without?
– Just one?!  I suppose I’d have to go with Don’t Breathe a Word.  It’s a stand-alone and it reminds me of the every day violence that goes on everywhere behind the scenes.  It’s such a powerful book for me and I could read it forever!

8.  Which book made you the angriest?
– Ha this is an easy one – The Elite by Kiera Cass for sure!  Every two pages I was shaking the book and yelling at America to get her life together!  It was one of the most infuriating books I’ve ever read no contest.

9.  Which book made you cry the most?
– This is a four-way tie – I could never decide!  First, We Were Liars by E. Lockhart.  Don’t tell me none of you cried at that ending!  Second, Harry Potter and the Half-Blood Prince when that one character died.  I had to step away from the book for a moment… going along with that, Harry Potter and the Deathly Hallows.  You all know who I’m talking about!  Third, The Book Thief.  I made the terrible mistake of reading that ending in public.  It was so sad!  And finally, The Fault In Our Stars.  Yep.  That.

10.  Which book cover do you hate most?
– For sure all of the Bloodlines series covers and Lux series covers.  Here they are:

Terrible.  They barely connect to their respective story lines and aren’t very pretty at all.  They’re great books fore the most part but the covers are just icky.


Since I’m kind of late to the party (I was nominated back in October) this is an open tag.  I have a feeling most people have already done this tag already.  So if you’d like to do it, go right ahead – I’d love to read your answers!