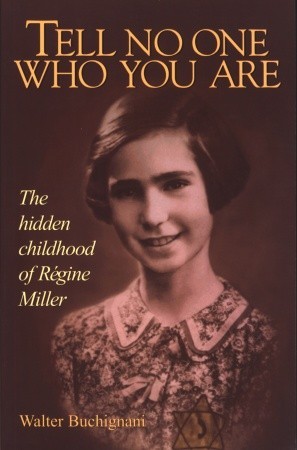 Amazon  Goodreads  Book Depository  Barnes and Noble
Goodreads Blurb:
“During the days of Nazi terror in Europe, many Jewish children were taken from their families and hidden. Régine Miller was one such child, who left her mother, father, and brother when she was 10 years old. Utterly alone as she is shunted from place to place, told to tell no one she is Jewish, she hears that her mother and brother have been taken by the SS, the German secret police. Only her desperate hope that her father will return sustains her. At war’s end she must learn to live with the terrible truth of “the final solution,” the Nazi’s extermination camps.

The people who sheltered Régine cover a wide spectrum of human types, ranging from callous to kind, fearful to defiant, exploitive to caring. This is a story of a brave girl and an equally brave woman to tell the story so many years later.”

Review:
I feel like I really don’t have the right to rate this because really, it’s just a woman remembering what happened to her during the Holocaust as a Jew.  But I am anyway.  Why?  Because I think everyone should know what all those people went (and are still going) through.  I’ve never read about the perspective of a child before and it was a welcome change because I had no idea what happened to the children during the Holocaust.  Sure, some (possibly most) went to concentration camps but what about the rest?  That’s where this book comes in.

This was such a quick read.  I read it in about 2 hours while I was watching amovie and I never was bored.  The mystery of who everyone was and what would happen to Regine kept me deeply immersed.

Also, before I forget, thank you to my aunt for recommending this to me!  It was so nice to pick up a historical book again after all the fantasy I’ve been reading.

So back to the book.  It really was a quick read but it’s so well put together.  There are pictures in the middle and there are some statistics at the end that really helped me understand the magnitude of what went on during that time period.

I also really liked how it ended.  It’s not like they could control how her story ends like in fiction but I liked that it wasn’t a happily ever after.  It painted a realistic picture of what so many families went through.

The Final Verdict:
If you’re looking for a quick but meaningful historical book, this is it.  I was immersed in this girl’s story and definitely came to know a lot more about the Holocaust.
5 stars

0 thoughts on “Review Sunday: Tell No One Who You Are: The Hidden Childhood of Regine Miller by Walter Buchignani and Regine Miller”