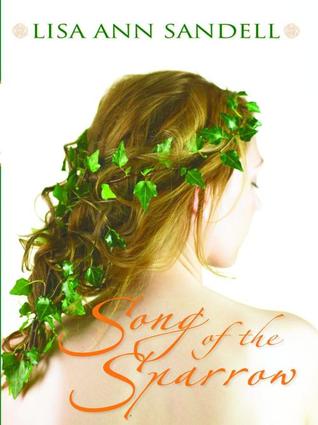 Amazon  Goodreads  Book Depository  Barnes and Noble
Stand Alone to Date
Goodreads Blurb:
“The year is 490 AD. Fiery 16-year-old Elaine of Ascolat, the daughter of one of King Arthur’s supporters, lives with her father on Arthur’s base camp, the sole girl in a militaristic world of men.

Elaine’s only girl companion is the mysterious Morgan, Arthur’s older sister, but Elaine cannot tell Morgan her deepest secret: She is in love with Lancelot, Arthur’s second-in-command. However, when yet another girl — the lovely Gwynivere– joins their world, Elaine is confronted with startling emotions of jealousy and rivalry. But can her love for Lancelot survive the birth of an empire?”

Review:
This is such a lovely, sweet book written in verse.  It hardly feels like verse though because it reads so smoothly.  You can gather and infer so much from the way the lines are formatted!  For that reason, I really liked it and would definitely reread it!  Well, that and other reasons!
For one thing, I love how the sparrow is incorporated into Elaine’s journey.  That’s what this book is really about: Elaine’s journey to find herself and where she belongs in the world.  She has an idea at the beginning of the book but it isn’t clear and she isn’t satisfied with her life.  She thinks she wants certain things only to find out that they aren’t for her.  The sparrow represents her spirit and how, at the beginning, it is trapped within her and only at the end is it set free.
The story is set in the time of Arthur and Lancelot and the Round Table which was really cool to read about.  However, be prepared that the story centers around Elaine and her personal internal struggles rather than the war or anything else going on at that time.  To that end, I really liked how the author incorporated the Round Table and put her personal spin on the story.
I just have to mention the cover too!  It goes perfectly with the story and it’s so pretty!!
The Final Verdict:
All in all, this is such a sweet little book about a girl’s struggle to find herself and where she belongs in the world.  It’s not really anything deep but not entirely fluffy either.
4 stars
Quotes:
“I live, yet”
“Still, I look down, and the grass is so green, I cannot understand how it does not wither and die with sorrow.”
“Love is a tempestuous mistress.And none of us shall ever master her.”
“It should begin with friendship, I think. Suddenly I cannot look at him.It should begin with friendship and truly knowing who a person is, knowing his flaws and hopes and strengths and fears, knowing all of it. And admiring and caring for- loving the person because of all of those things…I know that now.”
“My sparrow, she flickers and wakes and sings and sings. ”

0 thoughts on “Review Monday: Song of the Sparrow by Lisa Ann Sandell”