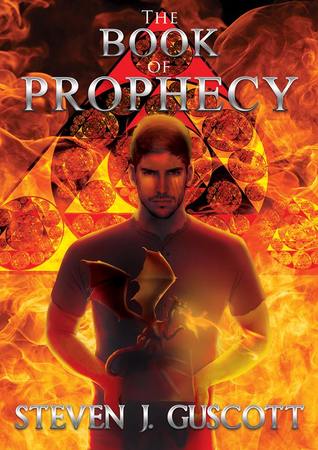 Amazon  Goodreads  Book Depository  Barnes and Noble
Stand-alone to date (although sequel possible)
Goodreads Blurb:
“No one in this quiet world knows what ignited the change; no one suspects that it all began with a secret book… Living among the innocent, in a society that has blossomed under seven centuries of tranquility, Dragatu expects to live out his days following the same path as his father before him, without even the smallest challenge to lift the monotony. But when he and his brothers are granted incredible mythical powers, every skill they possess is put to the test. Their actions will determine the fate of their people. What has been passed on in trust threatens to tear the brothers apart. Honour, love, power; all are at stake, and with them the only hope for a return to peace.”

Review:
Thank you to the author, Stephen J. Guscott, for gifting me with a copy of The Book of Prophecy in exchange for an honest review!
So there are three different topics I’d like to cover in this review: the perspective, the idea, and the characters/setting.  Each has both things I loved and things that I didn’t love so much which is what makes this a three star book for me.  Read on!
1.  The perspective.  The perspective of this book is more removed.  You learn of every event as it appears through the lens of Dragatu (the main character) as he writes in his journal.  In essence, you’re reading the journal he’s keeping throughout the years.  This has some benefits and drawbacks.  For one thing, it’s a really cool idea that ties in the importance of the written word.  However, it’s much more removed and I couldn’t really grow attached to any character or empathize with any of them because I was pretty much entirely removed from the story.  In addition, it makes it so much harder to distinguish between the voices of Dragatu, Freta (Dragatu’s wife), and Dragatu’s son (they all write in the journal at some point.  Their voices all seemed the same to me.
2.  The idea.  I did really like the idea of a city that’s in a different time with a fully functioning society that is pretty peaceful (from what we learn).  There are powers that are introduced near the end of the beginning of the book.  They are offered to the three brothers (Dragatu, Unilus, and Phoenon) and each brother chooses a different power which I thought really helped their personalities develop.  I also really loved the themes of jealousy and leadership that superimpose the entire story.  You can see it developing at a macro and micro level.  More on this in the next bullet!
3.  The characters/setting.  The themes of jealousy and leadership are displayed when Dragatu breaks off from his brothers with his own band of people and essentially becomes the ‘villain’.  I really liked how you can clearly understand the ‘villain’s’ reasons (for the most part).  It reminds me of Ender’s Game and the fact that we just have to accept that some people are different than ourselves.  Now onto the characters.   The characters themselves are all right.  As I mentioned in the first point, because it’s in journal form, you feel so much more removed from the characters.  Also, because this book takes place over an extended period of time (think 30 yearsish), there isn’t much time to delve into the characters before the scene is over.  Consequently, they were mostly two dimensional.  One character in particular that I want to mention is Freta.  I absolutely loved her in the beginning.  She started out as a strong female co-lead.  However, once I got deeper into the book, she turned into a bobble-head wife that pretty much went along with whatever Dragatu wanted.  In general, the characters started out pretty three dimensional and ended as two dimensional characters.  There was just one thing I wanted to mention about the setting.  There was never really any scale given for the city except for a few instances when ‘thousands of people’ were mentioned.  I’m not entirely sure how a society of thousands of people has managed to be as organized as it seemed to be as well as being as crime-less as it seemed.  A bit more world building would be appreciated.
The Final Verdict:
The Book of Prophecy has a wonderful idea and overarching concepts, however the inner-workings could use some fine-tuning.
3 stars
Quotes:
“‘I could be that someone.  But if not, I hope one day you will find him.'”
“‘Good.  Remember that everything you do is a choice Dragatu.  Choose well.'”
“‘The spiral and the numbers have been placed in a circular symbol that represents balance, because life is full of opposites, like the black and white you can see.  I have done this because life needs to balance.'”
“‘The past tense: you ‘chose’ the present tense, you have a ‘choice’, and the future tense, you have to ‘choose’, all represent these ideas of freewill and have symbolic representation of the self, and how things of the past, present and future add together to make up our personalities.'”
“‘Goodbye, my Someone.  I will keep my promises.'”
“‘We follow the Book of Law exactly, but we must also defend its teachings.  It says not to kill but if we’re attacked, we must be willing to protect the Book of Law and our way of life.'”

0 thoughts on “R&R Review Sunday: The Book of Prophecy by Stephen J. Guscott”