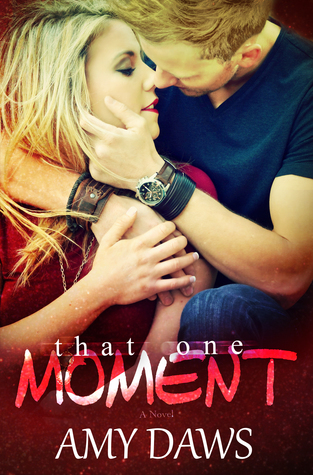 The moment I saw her…something shifted. The moment my lips touched hers…life got messy. The moment my heart got involved…everything changed. Vi Harris tests every bit of my strength. She is my test. My challenge. At a time when I should be focusing entirely on myself, this radiant woman with a bright, cheeky smile and a cracked sense of humor waltzes in and spins everything on its axis. Vi has the potential to make me weak at a time when I’m determined to show everyone just how bloody strong I am. She’s everything I am not…yet somehow, she sees through my darkness. My pain. My despair. She doesn’t see me as broken. She sees me as the man I’m fighting so hard to be. The man that I’m still struggling to see myself.”

Review:
Thank you to the author, Amy Daws, for gifting me with a copy of That One Moment in exchange for an honest review!
This is the second book  in a series and while it isn’t totally necessary to read the previous book, I would highly recommend it as there are quite a few references to the previous book.  With that in mind, let’s dive in!
1.  Hayden  and, to a lesser extent, Vi.  These two are our MC’s.  We get alternating POV’s in this book (which I’ll cover in the next bullet) between these two.  I really liked their characters for the most part.  They were unapologetic ally themselves and they each had little quirks about them that made them both so fun to read about and hear from.  However, sometimes I felt really frustrated with Hayden.  The book picks up after his suicide attempt, which, obviously messes a person up mentally and I really don’t have much experience with it.  But it just felt like Hayden could not get over himself and he put himself before other people.  I realize that’s part of his treatment and healing is to make sure he takes care of himself, but one of the things that goes into being a good human being and feeling like you belong is taking care of other people to.  This is where Vi comes in.  She’s such a great character.  I just hope, later in their story, that she doesn’t get buried and Hayden doesn’t forget that she has feelings too and everything he says and does has an impact.
2.  The alternating POV.  I really liked the author’s decision to write this book as an alternating POV book.  It really fits the story and the plot material well and shows both sides of the story.  I have to say, if it wasn’t alternating POV and we just heard from Vi, I would have told her to run from Hayden as fast as she could because it wasn’t a healthy relationship at all.  However, because we get to see Hayden’s side and understand what he’s trying to work through with himself and how Vi is helping him so much (and baby Marisa!), it makes you realize how beneficial a relationship like theirs is.
3.  The plot.  One of my favorite things about this book is the plot.  I loved how Hayden made his way through his new life and tried to make sense of everything.  We get to follow him on his journey as he starts to understand that being alive doesn’t necessarily mean that you’re living.  You have to truly take part in the world and feel as though you belong somewhere.  Another thing I wanted to mention: I love the setting and how it interweaves with the plot so well.  It’s set in London and the setting plays such a huge role.
4.  Just a few notes about the content.  Just an FYI, there is abundant swearing in this book although I think it really goes with the characters.  Also, the sexual content is meant for a mature audience.  As I think you’ve gathered, the book centers around suicide and it’s rippling effects.
The Final Verdict:
A touchingly gritty love story that follows the characters through the process of rediscovering themselves.  The plot is definitely my favorite part with the alternating POV’s facilitating the story-telling.  Be advised, there is mature content.
3.5 stars
Quotes:
“I can just hear the old birds saying silently, ‘Oh heavens, I want to go, but that might appear rude!'”
“I inhale sharply.
‘Is your brother Gareth Harris?  As in, Manchester United starting defender?’ My face is deathly serious.  She purses her lips.
‘Are you a fan?’
My eyes widen as she confirms my suspicions.
‘This means your dad is Vaughn Harris, the manager of the Bethnel Green Rollers.’
‘You’re a fan,’ she murmurs.”
“She leads us into a quiet little park oasis where a pair of poodles are prancing around proudly.  They take one look at Bruce and freeze.”
“Every day has twenty-four hours.  That’s one thousand, four hundred forty different chances per day that can affect the course of your life.”

0 thoughts on “Release Day Review Tuesday: That One Moment by Amy Daws”