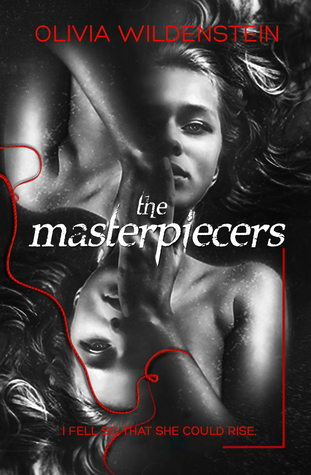 Amazon  Goodreads
Masterful #1
Goodreads Blurb:
“Nineteen-year-old Ivy Redd’s talent with a needle and thread has earned her a spot on a coveted reality TV art competition set in New York’s Metropolitan Museum. The prize: a significant amount of money and instant acceptance into the Masterpiecers, the school that ensures new artists fame and fortune. Her talent has also thrust her and her twin sister, Aster, into the spotlight.

Not that Aster needed help with becoming a media favorite. She managed that on her own by running over a wanted mobster. She told the police it was self-defense, because she couldn’t tell them the truth—the truth would make her sister look bad.Locked in an Indiana jail to await her trial, Aster watches Ivy on the small TV hanging in the dayroom. It’s the highlight of her day, until she finds out what her sister truly thinks of her. Then, observing her sister becomes a punishment far crueler than imprisonment.”

Review:
Thank you to the author, Olivia Wildenstein, for gifting me with a copy of The Masterpiecers in exchange for an honest review!
It actually took me a while to figure out how I felt about this book.  So this review may not be the most concise but I think I’ll figure it out!

1.  The story line.  This book is all about twin sisters Aster and Ivy and they’re involvement with a TV show and how it relates to a crime network.  In general, the plot felt really different than all of the other books I’ve read.  A lot of the story takes place when Ivy is competing in a TV show because she has talent in making artistic quilts while Aster is in jail for murder of someone who turns out to be a mobster.  The plot definitely took turns that I wasn’t expecting.  There are numerous twists that constantly keep you guessing throughout the entire book and I loved how the main story line didn’t dominate the book.  There were other, secondary plots and mysteries that I loved figuring out.

2.  The settings.  This is a weak spot for me in terms of this book.  While a select few of the settings were nicely described and left me feeling as though I were there, others weren’t as much.  Perhaps a few details were given, but not enough to immerse me.  It felt more like I was there on paper rather than in person.  One setting I really liked, though, was the ‘bedroom’ setting in the museum.  It’s a really cool idea and I did feel like I was really there.

3.  The background and The Masterpiecers.  This is another area where I felt the book could improve a bit.  By the end of the book, you have a bit of a sense of what the Masterpiecers is and what exactly is at stake etc etc but I felt pretty in the dark at the beginning.  That made the whole first third of the book kind of confusing to me (because I’m one of those people that doesn’t reread the blurb before they start a book).  I wish that there was a bit more background on The Masterpiecers.

4.  The characters.  This, along with the plot is the strong point of the story.  All of the characters are diverse and have different personalities and bring a new dynamic to the events occuring.  You really get a sense of each person and who they are and what they stand for.  I’m excited to learn more about them in the coming books!

The Final Verdict:
The strong points of this book are, without a doubt, the plot and characters.  They’re both entirely original and kept me engaged in the book.  However, there could have been a bit more background on The Masterpiecers (the show) and a bit more development in terms of setting.
3.5 stars


Quotes:
“Although I don’t want to talk about it again, I know she won’t let it go, so I tell her what I told everyone else.  I don’t tell her the real story.”

0 thoughts on “R&R Review Friday: The Masterpiecers by Olivia Wildenstein”