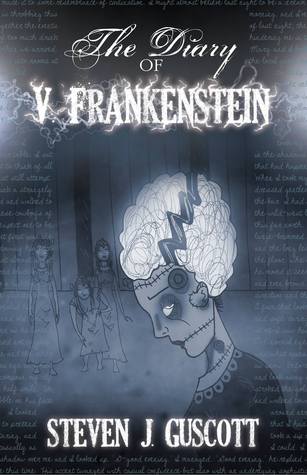 Amazon  Goodreads  Barnes and Noble
Stand-alone
Goodreads Blurb:
“The sins of the father are to be laid upon the children.

Dr Victor Frankenstein thought he had seen the last of his monsters when they promised to stay away from humanity, but in the twilight years of his life his hopes are shattered.
Years after their departure, news of a horrific and seemingly inhuman massacre reaches him and he fears it is his ‘children’ who are responsible. With his natural son Vincent by his side, he vows to discover the truth and if necessary, to destroy his monstrous creations once and for all.
When Vincent becomes separated from his father, he meets Mary, an idealistic and free-thinking peasant, and John Idaho Thatcher, an enigmatic explorer-cum-cowboy with a strange cogged and wired waistcoat and steed like no other. Together, they must battle not only Frankenstein’s monsters who look to wage war on the living with their warped perceptions of humanity, but also their own fears and personal demons.”

Review:
Thank you to the author, Steven J. Guscott, for gifting me with a copy of The Diary of V. Frankenstein in exchange for an honest review!
1.  The world and the writing.  So for this review, I’m going to start here for once!  This story is set a couple hundred years ago back in the late 1700s, just before Frankenstein was originally published.  Because we’re all pretty familiar with that day in age (especially in Europe), the author didn’t waste too much time setting the scene which I appreciated.  I also appreciated the author’s writing style as it allowed me to continue reading and not be jolted out of the story by strangely worded sentences and such.  When you’re writing a science fiction or fantasy novel, that’s key so the reader is entirely immersed in the world.
2.  The plot.  The plot in general is very good.  There are a couple things I had to frown at or that I was confused by.  Many I can’t say because this is a spoiler-free review but I’ll mention a couple.  For example, when Vincent first meets John, John tells him that he’ll take care of the ‘Matriarch’ (what they call the female creature who is similar to the original Frankenstein) problem but he comes back at the most inopportune moment to mention that he really is kind of incompetent and wasn’t able to really do anything about it.  While I can see that this makes John into a more human figure and less like a being that is omnipotent, I also see where this could have been a mistake.  Also, the entire theme of this book seemed to center around feminism and the idea that everyone, regardless of their looks, sexual orientation, gender, or anything else is equal.  However, I would have liked to see some of the feminist ‘projects’ and ‘education’ that Vincent and his wife, Mary, were doing.  It was a lot of talk but I just didn’t see it.
3.  The characters.  The characters were also generally good.  They were developed nicely through multiple conversations that centered around themselves and not their current issue.  However, I couldn’t help but notice that the one positive female in a book with a dominant theme of feminism didn’t have any development whatsoever besides her ‘free-thinking’ description.  However, I did enjoy the rest of the characters (though they were male) and their personalities were wonderful.
4.  The POV.  And finally, I wanted to mention the POV that this story is told in.  It’s written in a journal-like fashion with the characters who are writing in it telling the story.  You really have to keep this in mind while reading because they all have certain biases and they won’t write everything down because that would be a hassle (just like you or I wouldn’t write down every detail of our lives, even if there was an adventure).  This also allowed the author to switch points of view which is pretty cool and it worked out rather well.
The Final Verdict:
While the world and the writing are wonderful, I couldn’t get past the dominant theme of feminism not being acted out.  The characters aren’t very diverse and the plot was good, but again, there were some issues.  However, the idea of formatting the book in journal format turned out really well and I enjoyed it immensely.
3 stars
Quotes:
“I had to fight this monstrous behavior, and did so by reminding myself we are all human beings deserving of love and kindness.”
“Mary, John, and Anne have helped me realise that if equality is to be achieved I must understand the outward appearance doesn’t matter; only the desire to be kind, respectful, loving, and understanding.”
“True strength is from within and she is strong, therefore I will be strong.”