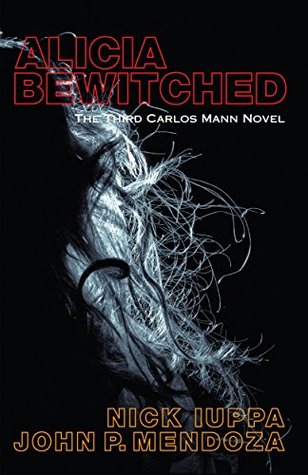 Amazon  Goodreads  Book Depository  Barnes and Noble
Carlos Mann Trilogy #3
Goodreads Blurb:
“Logic Professor Carlos Mann sets out to murder Tiger Joy in her prison cell. Unfortunately, the gorgeous queen of human traffickers captures him and ships him off to the Yucatan, where the evil witch, La Bruja, uses all her powers to try to weaken and destroy him. Meanwhile, Alicia calls on friends both living and dead to help save her husband, and in the process she learns many terrible secrets that were born in the days of the great Mayan Empire … secrets that could save or even destroy Carlos and Alicia.”
Review:
Thank you to the authors, Nick Iuppa and John P. Mendoza, for gifting me with a copy of Alicia Bewitched in exchange for an honest review!
1.  The characters.  This is the third book of this series and I’ve read all three so this book was really the completion of the character’s journey.  That being said, I’m not sure about any growth that the characters experienced other than Alicia learning to trust her husband a little more and to learn to control her anger.  While the characters are all lovely and built well, they didn’t change much which was slightly disappointing to me.  However, they all interacted so wonderfully together and their dialogue exchanges are written gorgeously.
2.  The plot.  The plot.  Hmm.  Here’s the thing.  This book was structured a bit like a never-ending barrage of hills.  Generally, books are written with an overall bell-shaped plot with a climax and all that jazz.  This book had a series of high moments and when you think, ‘wow, that was such a great conclusion’, you look down and see that the book is only half over.  I’ve read another book that’s structured like this (I, Robot) and it isn’t a bad way to structure a book, by any means, it’s just interesting.  It does take you on a rollercoaster of emotions and there is an overarching goal, however, I felt that the second half of the book that’s after Tiger dies felt like the authors just didn’t want to stop writing so they made her come back as a ghost and came up for a reason why.
3.  The witchcraft.  There’s a lot more witchcraft in this book coming from the witches involved.  I really liked this aspect of the story and it really added to the ghost theme.  I wish there would have been a little more explaining when it came to Carlos’s powers, though.  It seemed very convenient and there was only a harried explanation to go along with it.  It was an interesting aspect to add to his personality, however!
4.  The writing.  The writing is very good, in general.  The dialogue all flows beautifully and there are no awkward word or phrase placements which keeps you immersed in the story.  One thing I do wish the author’s had done was to infuse more of a theme into the story.  It’s a good story, but there’s nothing beyond that (no deeper meaning or anything of the like).
The Final Verdict:
A wonderfully written story with a solid plot and characters.  The entire novel could use a little more beefing up and thickening when it comes to the characters and the plot with all the explanations and such.  A good story, but with nothing beyond.
3 stars