Recently, I’ve been really into reading all of Agatha Christie’s books.  I own six of her books in paperback format so I powered through all of them these past two weeks and realized that I didn’t really have the desire to write a full review for all of them.  So what resulted was a round-up review post!  I’ll be reading a lot more Agatha Christie in the future but this is a good start!  I’m splitting up the reviews so this is part 1 of 2! 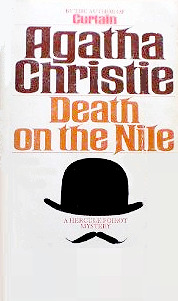 Death on the Nile by Agatha Christie
Hercule Poirot #17
Rating: 5 stars
Goodreads Blurb: Death on the Nile is a pre-Second World War novel, first published in 1937. It shows Agatha Christie’s interest in Egypt and archaeology and also reflects much of the flavour and social nuances of the pre-war period. Although the novel is set in Egypt, an exotic location, it is essentially a ‘locked room mystery’, as the characters are passengers on the river-steamer SS Karnak, cruising on the Nile. Amongst them is the famous Hercule Poirot, a short man dressed in a white silk suit, a panama hat and carrying a highly ornamental fly whisk with a sham amber handle – a funny little man.
I really liked this book for two reasons.  Number one: it takes you in such a round about loop so you think it’s headed somewhere but it ends in another place entirely.  Number two: it has a whole cast of characters so it really exercises your mind and you really have to remember all these people and think through their backgrounds and their statements and their position during the murders.  The thing I love most about Agatha Christie is that she’s so intricate and she isn’t afraid to make plot lines complicated and realistic (referring to the psychological aspect as well as the physical aspect).
Final Verdict: This is such an intricate story and every minute is filled with mystery and intellection. 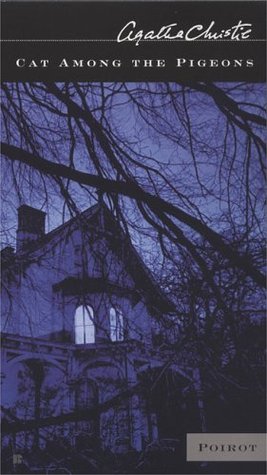 Cat Among the Pigeons by Agatha Christie
Hercule Poirot #32
Rating: 4.5 stars
Goodreads Blurb: Late one night, two teachers investigate a mysterious flashing light in the sports pavilion, while the rest of the school sleeps. There, among the lacrosse sticks, they stumble upon the body of the unpopular games mistress – shot through the heart from point blank range.

The school is thrown into chaos when the ‘cat’ strikes again. Unfortunately, schoolgirl Julia Upjohn knows too much. In particular, she knows that without Hercule Poirot’s help, she will be the next victim!

This book is set up slightly differently in that there are a fewer characters to sort through and it’s much more straight forward.  Perhaps this is because I’ve read it a few times but to me, there isn’t a clear answer until the end but it’s obvious what the motive is.  I did like how foreign countries were brought into it, though!  I do really like the title though.  It’s very mystery-like.
Final Verdict: Intriguing and compelling mystery although slightly less complex than others. 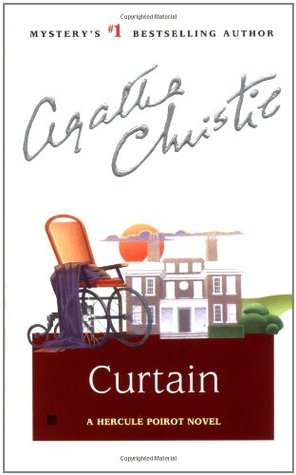 Curtain by Agatha Christie
Hercule Poirot #39
Rating: 5 stars
Goodreads Blurb: The house guests at Styles seemed perfectly pleasant to Captain Hastings; there was his own daughter Judith, an inoffensive ornithologist called Norton, dashing Mr Allerton, brittle Miss Cole, Doctor Franklin and his fragile wife Barbara , Nurse Craven, Colonel Luttrell and his charming wife, Daisy, and the charismatic Boyd-Carrington. So Hastings was shocked to learn from Hercule Poirot’s declaration that one of them was a five-times murderer. True, the ageing detective was crippled with arthritis, but had his deductive instincts finally deserted him?

The novel features Hercule Poirot and Arthur Hastings in their final appearances in Christie’s works. It is a country house novel, with all the characters and the murder set in one house. Not only does the novel return the characters to the setting of her first, The Mysterious Affair at Styles, but it reunites Poirot and Hastings, who last appeared together in Dumb Witness in 1937. It was adapted for television in 2013.

I really liked this installment because it brought in some personal elements and also featured a different type of murderer that you may not have thought about before.  This book features Hasting’s daughter as well as his personal relationship with Poirot and Poirot on his deathbed.  All in all, it makes for a very cool mystery.  Because Poirot doesn’t do much of the conversation or anything (Hasting’s does) it’s really fun to see if you can piece it together before Hasting’s does because he’s not quite as skilled as Poirot in putting these things together.  While it does make me sad that it’s Poirot’s last mystery, it was a good one and the way that the book ends is so contrary to his career and I love it!
Final Verdict: A wonderfully complex mystery with new personal elements and a new perspective.