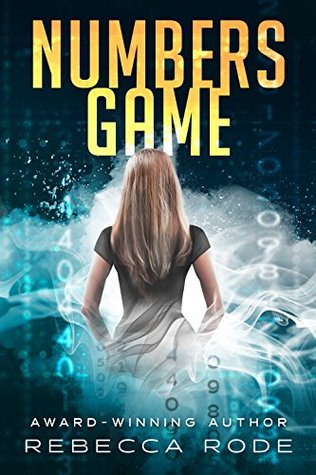 Amazon  Goodreads
Numbers Game #1
Goodreads Blurb:
“Treena is nervous for Rating Day. A single number will brand her forever—a valuable citizen, or a pathetic waste of space. Her top-Rated boyfriend is confident their scores will coincide so they can attend the academy together. But when the big day arrives, her true number shocks everyone.

To get her life and boyfriend back, she must go undercover and expose a military spy. Doesn’t sound too hard, except that someone wants her dead. And then there’s Vance, the mysterious soldier with a haunted past and beautiful brown eyes. Together, they discover a dark numbers conspiracy, one that shatters the nation’s future. Treena must join up with Vance if she is to survive the dangerous game of numbers—and the terrible war that rages within her heart.”

Review:
Thank you to the author, Rebecca Rode, and Olivia (review chain) for gifting me with a copy of Numbers Game in exchange for an honest review!
This was such an enjoyable read for me.  Quite honestly, I couldn’t put it down and I read the night away just so I could see what happened.  So yes, generally speaking, I enjoyed this a fair amount!
1.  The plot.  This is what mostly kept me reading.  There’s just so much to think about and so many moving pieces and you want to see where they fall in the end!  All of the plot points were extremely interesting to me and they all contributed to the book (and to character development) in some way.  While sometimes I wish some parts of the book would have been expanded and not glossed over in time (for example, two weeks passed), for the most part, everything was well developed.  Each scene flowed beautifully from one to the next and the entirety of the book was connected.  The storyline was mildly typical but not so much that it dampened my enjoyment.
2.  The characters.  What can I say?  The characters were all flawlessly developed.  They each had background stories that further deepened their respective pools and their actions really did reflect themselves.  I loved seeing all of the characters interact with each other.  I found it especially interesting getting to know Treena and her state of mind.  She goes through all of this at such a vulnerable age and she’s had to deal with so much because of the Ratings system, it creates interesting dynamics between her and the other characters and the plot.
3.  The romance.  I think I inevitably have to talk about this because you could see it coming a mile away (it’s even in the blurb).  Treena thinks she’s found happiness with Dresden (her perfect boyfriend) but when she is shipped off, she finds a new love interest who is entirely different.  While I resent the addition of a love triangle (it seems like there’s no escaping them these days), it was cool to see how each guy was not only representing themselves, but also different ideals and warring perspectives in Treena’s mind.  So while I didn’t enjoy the whole ‘struggle who to pick’, I did enjoy how it played into the story and what it meant for Treena’s character.
4.  The world/themes.  As for the physical world, I just wish there would have been more descriptions of the physical locations.  There isn’t a map and sometimes I found myself backtracking and rereading different locations to try and arrange them all.  As for the world itself, I found it rather fascinating.  It definitely sparks conversation on what makes a person worth something and if we are all inherently worth something, being human beings.  I’m very intrigued by the thought that while in our world, we don’t have numbers on our foreheads broadcasting our ‘worth’, we do tend to put people into boxes and look down on certain people (the homeless, drug addicts, etc) as ‘bringing down society’.
The Final Verdict:
This book has an enthralling theme and brings up fascinating questions while simultaneously pulling you in with a well-crafted plot and characters.  I do have a love-hate relationship with the romance, however, and I do wish there had been a map of some sort.
4.5 stars