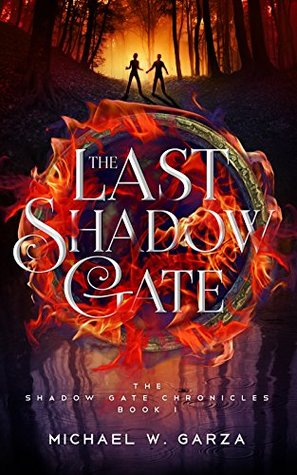 Amazon  Goodreads
The Shadow Gate Chronicles #1
Release Date: 3/3/17
Goodreads Blurb:
“Summer vacation was never supposed to be like this.

It was bad enough Naomi had to be shipped off to her dad’s home for the summer and deal with her half-brother Gavin, but when the siblings are forced to spend their break with their great-grandmother in upstate New York, everything changes. An investigation into the strange disappearance of their great-grandfather forces them to retrace his footsteps. They discover a gateway between worlds and encounter extraordinary creatures in a land where the people are desperate to escape the coming of a shade lord. To survive their adventure, Naomi and Gavin must settle their differences and find the elusive shadow gate that will take them home again.

Review:
Thank you to the author, Michael W. Garza, for gifting me with a copy of The Last Shadow Gate in exchange for an honest review!
Generally speaking, I really liked this book!  It has fantasy and mystery and new worlds which are all wins in my book.  However, there were a couple of things (like in-depth character development and physical location confusion) that put a bit of a damper on my enthusiasm.
1.  The characters.  As I mentioned above, there was a little lack of in-depth character development.  The characters were all there and they were all distinctly different, but they felt more like 4-foot pools to me rather than a full on 10-foot pool.  They were developed enough for the story, but there really could have been some extra oomph.  I loved learning about the different species of organisms on the new world and I loved getting to know their quirks.  There were half-spider, half-man people, ‘regular’ looking people, crazy tall people, etc etc.  The variety was so cool and felt akin to what we define as ‘race’ in our world.  I found Tiberius especially intriguing and I think he was one of the better developed characters (he guides Gavin and Naomi).  As for Gavin and Naomi themselves, like I said, they could have used something extra.  I did find it slightly annoying how Naomi was always looking to be rescued and a man had to do the rescuing.
2.  The plot.  This is the element that I found enthralling in this book.  While it certainly wasn’t character-driven, it was definitely plot-driven.  There’s enough mystery involved in the shadow gates and how they work to keep you captivated.  Gavin and Naomi essentially get stuck in this new world and have to find their way back home but not before they run into problems actually doing that and fighting a battle that their great-grandfather tried to fight.  I’m expecting great things from the next few books as I expect the children will be further exploring what the shadow gates mean and how they work.
3.  The world.  As I mentioned, Naomi and Gavin are stuck in a new world and are trying to get home,  I found the new world quite fascinating because of it’s remarkable similarities and differences to our own world.  The only thing that could have made it better would be a map.  I found myself disoriented when physical locations were mentioned and while I tried to keep it all in my head, sometimes it’s nice to have a map to reference.  Otherwise, the world building is quite good.
4.  The writing.  The overall pace of the book was nicely done and I never felt bored or like everything was moving too quickly.  I also felt very connected to everything happening and the dialogue felt very true to the characters and their personalities.  There were some places near the end where the events seemed rather ridiculous (for one, people don’t just hop right back up after being shot in the chest, no matter how much adrenaline you have in your system) but overall, everything ran smoothly.
The Final Verdict:
An enthralling novel with a stunning plot and captivating world.  However, the characters could have used more development and I truly wish there was a map for reference.
3.5 stars