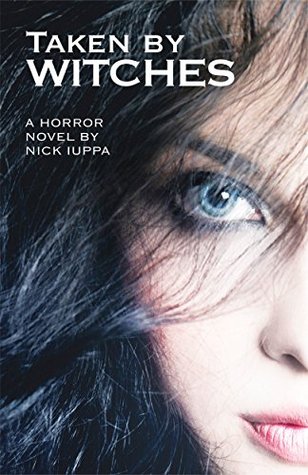 Amazon  Goodreads
Stand alone to date
Goodreads Blurb:
“When he was a child, Niko Madonie was terrified of his over-protective grandmother. Somehow he know she was a witch possessed of overwhelming supernatural powers and determined to save him from the real and imagined dangers of the modern world. Now a successful writer in Hollywood, Niko is helping create and animated version of Hansel and Gretel while he struggles to protect his beautiful young wife from sexy, New Age witches who hope to sacrifice her to please the ancient crone.
This is an epic horror romance set against a background of legends, with complex villains, a magical young couple, and a storyline straight from the darkest pages of the Brothers Grimm.”

Review:
Thank you to the author, Nick Iuppa, for gifting me with a copy of Taken by Witches in exchange for an honest review!
This is an interesting book.  In general, I’ve found all of Mr. Iuppa’s novels to be rather unique and different.  The most important thing while reading is to keep an open mind and allow yourself to become a surrealist of a sort.
1.  The characters.  I really appreciated one character in particular: Babcia.  She’s the ‘evil’ witch that also happens to be Niko’s grandmother who seems to follow him throughout his life, even after death.  I loved how the author really made an effort to emphasize that good and evil are entirely subjective and change depending on which side of an equation you’re on.  She’s such a complex character and I enjoyed learning about her past.  The other characters were also very well developed and interesting.  There were multiple POV’s in this book (not fitting any pattern but simply shifting when necessary to provide emphasis or insight) and I found they worked very well in giving a clearer picture of the entire situation.  However, I did find myself confused several times because of the similarities between the character’s voices.  While there are subtleties, you really have to pay attention.
2.  The plot.  This is where my introduction paragraph comes in.  You really have to keep in mind that it’s meant to be odd.  Once you let go of logic, it makes everything so much more enjoyable.  The plot itself is nicely paced with good conflict throughout however I found the middle a little dicey because I wasn’t sure where everything was going.  The book basically takes place throughout Niko’s life, concentrating mostly on his adult, graduate school years.  I really enjoyed the comprehensive approach although, again, sometimes it felt aimless.
3.  The idea.  This book is all about the idea of having modern day witches and those witches have contact with other, more ancient witches who are all squabbling over mortals.  It was an interesting world to be immersed in and there were plenty of new ideas to ponder.  However, I do wish there would have been more development on the nuanced history of witches, how widespread throughout the world they were, etc, etc.  It felt incomplete which made it feel more story-like and less immersive.  The whole Brothers Grimm theme was such a win for me, though.  The author did a fabulous job staying true to their tone and, quite honestly, gruesome and sometimes odd way of seeing the world.  If you’ve ever read the original Brothers Grimm fairytales, you know exactly what I mean!  While this isn’t exactly a retelling, it takes their ideas and injects them into a new situation.
4.  The romance.  While the book doesn’t really center around a romance, there’s a lot of it included and there’s plenty of explicit material.  The romance was adorable and well-fitted to the time period (1960s-70s).  Sometimes it felt like the sex scenes were unnecessary but mostly they fit well with the overall tone and feel of the book.  Taken by Witches has a very dark and gritty tone in general which made most of the occurrences well-suited to the book.
The Final Verdict:
Generally well built foundation stones but the details felt a little off.
3.5 stars