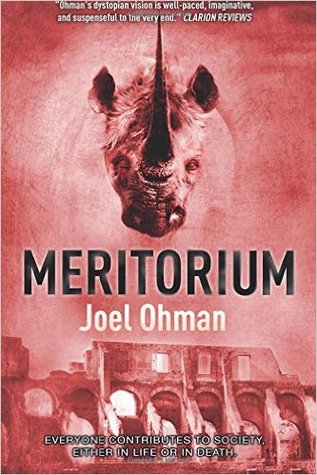 but in his quest to take down the System that has taken his brother from him, he must go through Meritorium, a city where gladiatorial games of life or death combat are waged between High Scores and Low Scores, man and beast.

Charley and Sandy must face man-eating plants, religious zealots, slave traders, and the ever present mutant animal combinations that roam a dystopian Coliseum presided over by Emperor Titus, the one man standing between Charley and the answers he seeks. Man is not an animal, but if they are to make it through Meritorium, will they even be able to tell the difference?

The lines between man and beast, friend and foe, will blur in Meritorium, the riveting sequel to the bestselling Meritropolis.”

Review:
Thank you to the author, Joel Ohman, for gifting me with a copy of Meritorium in exchange for an honest review!
I’m struggling to articulate my feelings on this book.  On one hand, there were plenty of little moments (and a few big ones) that did not sit well, however, there are a plethora of other elements that were spot on.  Let me explain:
1.  The characters.  I did really like all of the characters.  They were all well developed and each had their own distinctive personality.  There are multiple POV’s in this book and they are all very well marked and with those POV’s, comes the extra chance to get inside the characters’ heads and hear their thoughts.  This is where my apprehension comes in on several accounts.  First, Charlie.  We’re in his head the most so you really get to know his personality and he is quite the character.  You can see quite clearly that he’s suffering from unconscious sexism as well as narcissism and a healthy dose of arrogance, irrationality and insecurity.  Now, you don’t always have to love a MC which is why I’m struggling with this so much.  I really didn’t like Charlie, but he’s a well developed character, nonetheless.  I think I was hoping he would begin to identify these traits within himself and begin the process of righting those wrongs.  He does some of the former but doesn’t even attempt the latter.  Secondly, Orson.  He’s quite the conundrum,.  There are only a few sections in his head but I got a pretty good read on his character (which is a testament to the author’s skill).  However, when it came to his actions at the end, he didn’t make any sense.  There is a bit of a disconnect between his actions and his thoughts/feelings.  The third, and last person I want to mention is Sandy.  I loved her attitude.  She kept her head on straight and wasn’t afraid to do what she needed to do.  So generally, I did like the characters and their development.  It was simply coming to terms with my dislike of their characteristics.
2.  The plot.  This is a strong point in this novel.  The author does such a good job of keeping the overall drive alive and making sure there is always an end goal to be reached.  Sometimes I wish he had acknowledged the bigger picture and what would happen after everything (you can’t simply focus on toppling a dictator if you don’t know what comes after).  However, that also plays into Charlie’s character traits and his unwillingness to look at the bigger picture and temper his impatience.  There’s quite a nice plot structure, nonetheless, and the ending leads nicely into what I presume to be the final book.
3.  The setting.  Personally, while I think the author did a good job with the immediate physical spaces and their descriptions, I do wish there would have been more of the larger picture and perhaps more descriptions of the city besides the fact that it had a lot of people, etc etc.  There wasn’t a larger, overall picture to everything.  Conversely, as I previously stated, the immediate physical surroundings of the characters are well captured and felt, especially in the battle scenes (in which physicality is extremely important).  As for the atmosphere and tone, I think it was adequate.  While I wasn’t feeling the despair and other overall emotions jumping off the page, they were very present and I was quite engrossed in the story.
4.  The animal combinations.  This is the coolest part of this series for me.  Before each chapter, the author has illustrations of each animal combination and what they look like which helps so much with picturing them and their interactions with the characters.  All of the illustrations are of organisms that are in each of the chapters.  They are also all incredibly unique and it’s such a perfectly original idea.
The Final Verdict:
The originality of this series continues to be it’s hidden gem.  While I disagree with the morals and actions of some of the characters, they are all very well developed and 3-dimensional.  The macro-world could use a bit more fleshing out., however the micro-world is well utilized.
4 stars
Quotes:
“‘The present becomes the past, the future becomes the present.  Life continues.'”
“As much as he hated the System, he had come to rely on his standing as a High Score in ways he hadn’t fully realized.  This self-realization of privilege startled him: those who have it are blind to it; those who don’t, see nothing but their lack of it.”
“But if she was to just pick and choose who deserved to live and who deserved to die, how was she any different than the System?