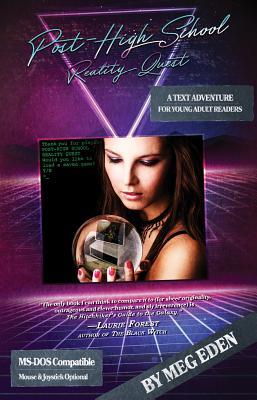 Amazon  Goodreads  Book Depository  Barnes and Noble
Standalone to date
Goodreads Blurb:
“Buffy is playing a game. However, the game is her life, and there are no instructions or cheat codes on how to win.

After graduating high school, a voice called “the text parser” emerges in Buffy’s head, narrating her life as a classic text adventure game. Buffy figures this is just a manifestation of her shy, awkward, nerdy nature—until the voice doesn’t go away, and instead begins to dominate her thoughts, telling her how to life her life. Though Buffy tries to beat the game, crash it, and even restart it, it becomes clear that this game is not something she can simply “shut off” or beat without the text parser’s help.

While the text parser tries to give Buffy advice on how “to win the game,” Buffy decides to pursue her own game-plan: start over, make new friends, and win her long-time crush Tristan’s heart. But even when Buffy gets the guy of her dreams, the game doesn’t stop. In fact, it gets worse than she could’ve ever imagined: her crumbling group of friends fall apart, her roommate turns against her, and Buffy finds herself trying to survive in a game built off her greatest nightmares.”

Review:
I received a review copy of this book from the author.  All opinions expressed in this review are my own.
This is another book I have complicated feelings for.  It’s so wonderfully original and unique but as a consequence, it took me a while to get used to the story and the ending left me confuzzled.  Let’s get into it, shall we!
1.  The POV.  Normally, I start off with the characters but I think it’s really important to begin with the POV because it kind of impacts everything else.  As it says in the blurb, this book is narrated by a game.  You know those games that just write out what’s happening and then you select your reaction to events.  They’re called text parser games (you can look it up if you still don’t know what I’m talking about because honestly I don’t know how else to describe it).  So the entire book is a mix of first and second person which I found to be pretty cool, honestly.  I’ve never read a book in second person before and now I understand why not many books are written that way.  It can be really tricky getting it right and there isn’t a whole lot of depth to be found.  However, mixed in with the first person, it was slightly better and was a bit more readable.

2.  The concept.  This is another thing I think I have to address right away.  This review is getting all kinds of turned around!  From the blurb, you’d think this book is all about finding out what’s going on in Buffy’s head and her learning to live with her quirks and life in general.  While that’s generally true throughout the book, there isn’t much focus placed on it and the ending completely disregards that idea.  I think there was a bit of a disconnect between what the author wanted it to be about at the beginning and what ended up happening.  It isn’t a bad thing at all but because of what happened, there are some inconsistencies and near the middle I was questioning what the point of the book was at all.  To that end, I really liked how the book ended but I wish the author would have more fully developed the whole idea.  In summary, there were two final takeaway’s directly contrasting with each other and each didn’t receive enough attention: life is a game, and the challenges of mental illness.

3.  The characters.  I really enjoyed this part of the book.  Being in Buffy’s head is so fascinating and I loved seeing how she would react to different events.  She has such an interesting and creative mind and always reacted in unexpected ways.  I don’t know if I would go so far as to say she’s likeable or that I wasn’t frustrated with her from time to time, but I was never bored and she kept me on my toes.  The supporting characters are also very well imagined.  Sephora (Buffy’s ‘friend’) is especially interesting and I was intrigued by her attitude towards life.

4.  The romance.  Romance is a significant part of this book and it was very sweet to read.  There is a fair amount of teen drama, though, but there isn’t much of a love triangle.  While the romance itself was sweet (and pretty entertaining), I think the author could have played up the tragedy a bit more.  In general, there are some aww moments but there aren’t any really heart-wrenching scenes.  There were highs and lows but the lows were pretty downplayed for some reason (perhaps it was a product of the second person POV) and it was kind of weird to read a sad scene and not feel anything at all.

The Final Verdict:
An interesting spin on novel writing with the ever rare second person POV was attempted and is something I would consider a general success.  While the ending and themes of the book are a little obscure and muddy, the characters present a unique spark.
3 stars