50/50 Friday is a meme hosted by Carrie @The Butterfly Reader and I and focuses on the opposite sides of books (best/worst, differing opinions, etc).  Every week will have a new topic and several advance topics will be listed in the tab labeled 50/50 Friday!
Today’s Topic: Best/Worst Book Read in October 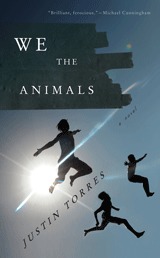 We the Animals by Justin Torres
Standalone to date
Goodreads Blurb:
“An exquisite, blistering debut novel.Three brothers tear their way through childhood — smashing tomatoes all over each other, building kites from trash, hiding out when their parents do battle, tiptoeing around the house as their mother sleeps off her graveyard shift. Paps and Ma are from Brooklyn — he’s Puerto Rican, she’s white — and their love is a serious, dangerous thing that makes and unmakes a family many times.Life in this family is fierce and absorbing, full of chaos and heartbreak and the euphoria of belonging completely to one another. From the intense familial unity felt by a child to the profound alienation he endures as he begins to see the world, this beautiful novel reinvents the coming-of-age story in a way that is sly and punch-in-the-stomach powerful.Written in magical language with unforgettable images, this is a stunning exploration of the viscerally charged landscape of growing up, how deeply we are formed by our earliest bonds, and how we are ultimately propelled at escape velocity toward our futures.”
I read this for one of my English courses this semester and I loved it!  It kind of reminds me of A Monster Calls by Patrick Ness just because of the way it’s written and the themes that are covered.  This is a super quick read (just over 100 pages) and I love how metaphorically it’s written.  It almost reads like a collection of short stories except it has this remarkable arc running through everything.  The end is especially wonderful.  I gave this a preliminary rating of 4 stars (although I think I’m going to go to 4.5).
Worst:

Everwild and Deadlands by Kayla Jo
The Healer #1 and #2
Goodreads Blurb:
Everwild:
“Sixteen year old Willow Rose thought she was just an average first degree witch until everything changed the night of her talisman ceremony. What was supposed to be the best day of her life has now become a horrible nightmare after discovering she was born with a rare healing power, one that has caught the attention of Hekate, Queen of the Witches. Hekate can only take Willow’s power by extracting it from her, which will ultimately end her life. To make matters worse, Hekate has captured the sisters of her Coven and locked them in a box of souls. After visiting a Seeker, Willow learns that Hekate has hidden her talisman deep in the heart of the Everwild, a dark forest filled with evil and horrifying creatures, a place that no one should enter willingly. Thrust into the Everwild to search for her talisman, Willow must face horrors beyond imaginable and come to terms with who she is while suppressing feelings for the Head Warlock’s son, Declan, who was unwillingly sent to the Everwild with her. In order to become powerful enough to defeat Hekate and save her sisters, Willow must have her talisman, but will love and the will to survive the dangers of the Everwild truly be enough to conquer all things?”
Deadlands:
“Willow Rose, Witch Healer, has learned an awful truth. After winning her talisman back in the Everwild, the Dark Witch Hekate has hidden the key that will unlock Pandora’s Box deep in the heart of the Deadlands. Concealed within a volcano, the Deadlands is a place known of eternal condemnation of the fiercest, foulest creatures on Earth. Yet, not everything is what it seems. The Deadlands have been civilized and are being ruled by the Deadland King, who has joined forces with Hekate and is planning to unleash an army to dominate all races. Willow learns that Declan is hiding a little secret of his own, and the connection between Elirana and Chase is revealed. But battling evil creatures and reaching the heart of the Deadlands is not Willow’s only problem. The problem is…how will she find the key and make it out alive when fate takes a turn for the worse?”
These are my only rereads this month and they’re also my lowest rated at 2 stars (for both of them).  I read them for the first time back in the days when I was first getting into the rating game and reading seriously and I gave them ratings of 4 and 3.5 stars, respectively.  I just reread them and I don’t think I can keep those ratings in good conscious.  Reading them now brings to light so many issues.  I’m thinking of doing an entire post on this in the future so look out for that!
What did you read in the month of October?  Any favorites or least favorites?  Make a post and link up down below!
document.write(”);
Next Week’s Topic: Favorite/Least Favorite Movie Tie-In Cover