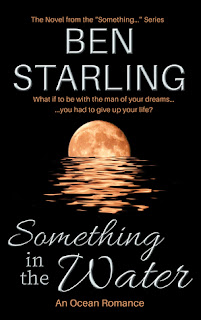 Amazon  Goodreads
Series: Something (no particular order)
Goodreads Blurb:
“The sealed box Teal finds in the street contains more than just a mystery…What if to be with the man of your dreams…you had to give up your life? On the verge of losing her job, side-lined journalist Teal Douglas is forced to travel to the South Pacific to profile a powerful businessman. But with her almost-but-not-quite fiancé Bear discouraging her every step of the way, she may not be able to save her career or her relationship.When corporate criminals invade paradise, Teal teams up with former boxer turned marine biologist Perry Stanley to investigate. As she discovers the true intentions behind their new fishing operations, she must either accept the plum promotion that will save her career or—with Perry—defend the island with more than her life.This full length novel in the soul-stirring series by Ben Starling continues the journey begun in Something in the Air, a short story now available on Amazon.”

Review:
Whew!  This was quite a journey!  I’m just going to jump right into this review because I have a lot to say and not enough space to say it.
1.  The topics/themes.  I wanted to address this first because of it’s immense importance to me.  I haven’t mentioned it here before but my major at university (the main program I’m completing) is environmental biology and the topics of this book really spoke to me.  I haven’t read many books that have conservation take center stage so it meant a lot to me for this author to pick that as their main theme.  The plot doesn’t start out as such but it evolves from a journalist just trying to win an award, to that journalist uncovering a plot that spells bad news for the environment.  There are several places where the theme of Earth stewardship is especially pronounced (for one, there is a giant ball of carved animals and if you take too many of the carvings away, the sphere collapses which is such a perfect metaphor for the fragile ecosystems of the earth) and this is something that’s of great importance to me.
2.  The plot.  As I mentioned above, the plot centers around a journalist named Teal and her adventures on an island in the South Pacific.  While for a bit I was slightly confused as to the nature of the book (it combines elements of mystery, environmentalism, and fantasy with a bit of romance tied in), it soon became clearer as I read (probably would have helped if I had actually read the blurb – I got this a long time ago!).  The one tick mark against this book that kept my rating from 5 stars is how little exposition there is.  Yes, jumping straight into the plot can engage people (it certainly kept me engaged), but it can also cause them horrible confusion.  Teal’s boyfriend, for instance, is referred to by three different names in the span of around five pages and it’s never explained that these are the same people.  It would have been great if there was a little more explanation as to who these people are and what their backgrounds are.  This problem perpetuated itself throughout the novel as I consistently found myself confused about the exact settings (things like switching islands or boats).  Generally speaking, though, I couldn’t put this book down!
3.  The characters.  While the characters are slightly stereotypical (the person with a utilitarian point of view vs the environmentalist), I found myself loving each of the characters.  I think that they could have done with a little more exposition themselves but overall, you get a good feel for them.  I especially loved Perry as he’s very much the type of person I want to be after I graduate (or maybe before!  There’s a research trip to the Galapagos this summer!) and I always found myself loving he and Teal’s conversations.  Generally speaking, each of the characters had something that made them stand out; spunk if you will.
4.  The romance.  This is something anyone could see coming a mile away but that didn’t make it any less adorable.  If you’ve ever read any of Kasie West’s novels (one of the YA contemporary queens), you know what I’m talking about.  It was such an inevitable romance and so sweet and well-written at the same time.  It’s a slow burn relationship that develops throughout the novel and it’s so much more than a physical relationship which I loved.
5.  The ending.  I didn’t want to wrap up this review without addressing this quickly.  I won’t spoil anything but let me just say that you will need tissues for this.  The ending is so emotional and symbolic.  It reminds me of the end of environmental movies where they always put in a bit of hope.  All of the different plotlines came together (the weird music that Teal and her grandma heard, the romance, the environmental perspective, the future of the resort, and Tea’s career) is drawn to a close with skill.
The Final Verdict:
The fantasy elements may seem a bit odd at first but I would highly recommend this to anyone and everyone.  The themes it presents are completely timely and relevant in an age where looking to the slightly distant future is a rare occurrence.  The characters, romance, and ending are spot on as well.
4.5 stars
Favorite Quote:
“Sand is time’s way of reminding rock who is boss”

0 thoughts on “Review Tuesday: Something in the Water by Ben Starling”