If you don’t know already, I’m in university and I’m doing two programs: Environmental Biology and English Critical Studies.  For my English program, we tend to read quite a bit (naturally) and this semester I was in a course that studied the novel (basically a LOT of structure discussion).  I’ll be doing a few round up posts (we read 8 books so I decided to do two books per post for a total of 4 round ups) to recap my thoughts on the novels we read! 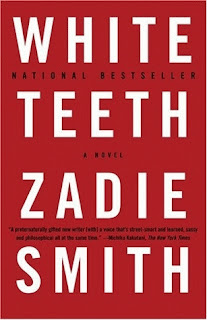 White Teeth by Zadie Smith
Amazon  Goodreads  Book Depository  Barnes and Noble
Standalone to date
Blurb:
“On New Year’s morning, 1975, Archie Jones sits in his car on a London road and waits for the exhaust fumes to fill his Cavalier Musketeer station wagon. Archie—working-class, ordinary, a failed marriage under his belt—is calling it quits, the deciding factor being the flip of a 20-pence coin. When the owner of a nearby halal butcher shop (annoyed that Archie’s car is blocking his delivery area) comes out and bangs on the window, he gives Archie another chance at life and sets in motion this richly imagined, uproariously funny novel. Epic and intimate, hilarious and poignant, White Teeth is the story of two North London families—one headed by Archie, the other by Archie’s best friend, a Muslim Bengali named Samad Iqbal. Pals since they served together in World War II, Archie and Samad are a decidedly unlikely pair. Plodding Archie is typical in every way until he marries Clara, a beautiful, toothless Jamaican woman half his age, and the couple have a daughter named Irie (the Jamaican word for “no problem”). Samad —devoutly Muslim, hopelessly “foreign”— weds the feisty and always suspicious Alsana in a prearranged union. They have twin sons named Millat and Magid, one a pot-smoking punk-cum-militant Muslim and the other an insufferable science nerd. The riotous and tortured histories of the Joneses and the Iqbals are fundamentally intertwined, capturing an empire’s worth of cultural identity, history, and hope.Zadie Smith’s dazzling first novel plays out its bounding, vibrant course in a Jamaican hair salon in North London, an Indian restaurant in Leicester Square, an Irish poolroom turned immigrant café, a liberal public school, a sleek science institute. A winning debut in every respect, White Teeth marks the arrival of a wondrously talented writer who takes on the big themes —faith, race, gender, history, and culture— and triumphs.”
Review:
I actually really enjoyed this!  There’s a large cast of characters so you do have to keep track of everyone.  This makes the beginning third or so a bit of a slog but it’s completely worth it.  The whole book jumps back and forth in time and it’s all brought together brilliantly in the end.  Trust me, if you’re struggling, the end is totally worth it.  The writing is a bit dense (and not too flowery) so you also have to be prepared for that.  Another bit I wanted to mention: the endless themes.  This book deals with so many issues ranging from immigration and the immigrant experience to the ethics of genetic engineering.  It’s quite the compilation but somehow it all works together.  One last thing: the teeth analogies.  I LOVED this.  Smith uses teeth as a way to express certain feelings and concepts throughout the book (for example, pulling out wisdom teeth), using our inherent connotations.  This is done so artfully and beautifully.
The Final Verdict:
While it’s a bit deep and dense in the first third, once you make it past that marker, the world truly opens up like a flower.  The characters are well done and the ending makes remembering all the characters completely worth it.
4 stars 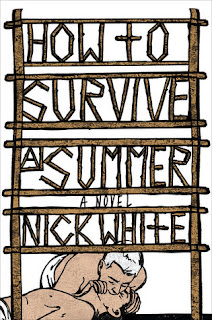 How to Survive a Summer by Nick White
Amazon  Goodreads  Book Depository  Barnes and Noble
Standalone to date
Blurb:
“A debut novel centering around a gay conversion camp in Mississippi, and a man’s reckoning with the trauma he faced there as a teen. Camp Levi nestled in the Mississippi countryside is designed to “cure” young teenage boys of their budding homosexuality. Will Dillard, a Midwestern graduate student, spent a summer at the camp as a teenager, and has since tried to erase that experience from his mind. But when a fellow student alerts him that a slasher movie based on the camp is being released, he is forced to confront his troubled history and possible culpability in the death of a fellow camper. As past and present are woven together, Will recounts his “rehabilitation,” eventually returning to the abandoned campgrounds to solve the mysteries of that pivotal summer, and to reclaim his story from those who have stolen it. With a masterful confluence of sensibility and place, How to Survive a Summer introduces an exciting new literary voice.”
Review:
I enjoyed this for the most part.  It mainly deals with Will’s traumatic memories of his time at a gay conversion camp which was heartbreaking to read about.  Again, in the beginning I found it hard to get into.  There’s the initial hook in the first chapter but then the proceeding 5-6 chapters were just really hard to get through for me.  The book also deals in past and present (the story is being told in the present and Will remembers things from his past relating to that summer) and I loved the switches back and forth.  It was very easy to follow and it was a good choice of the author’s to have the past directly told rather than the reader just getting it second hand as a memory.  As for the characters themselves, I loved how White didn’t portray the people of the camp as these faceless, evil, religious people.  They had a past (which was included) and that made it clear that everyone has a past and has reasons for what they do, even if it seems evil to others.  I also had the opportunity to hear Nick White speak (he went to graduate school with my professor) which was a great experience.
The Final Verdict:
Make it through the beginning exposition: the ending is completely worth it.  The characters are very well fleshed out and the structure is put together nicely.
4 stars
Have you read either of these books?  What did you think of them?  How do you feel about past/present narratives?  Let me know in the comments!

0 thoughts on “English Course Mini Review Round Up: Part 1”