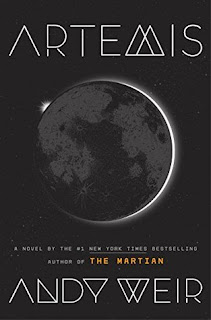 Amazon  Goodreads  Book Depository  Barnes and Noble
Standalone to date
Blurb:
“Jazz Bashara is a criminal.Well, sort of. Life on Artemis, the first and only city on the moon, is tough if you’re not a rich tourist or an eccentric billionaire. So smuggling in the occasional harmless bit of contraband barely counts, right? Not when you’ve got debts to pay and your job as a porter barely covers the rent.Everything changes when Jazz sees the chance to commit the perfect crime, with a reward too lucrative to turn down. But pulling off the impossible is just the start of her problems, as she learns that she’s stepped square into a conspiracy for control of Artemis itself—and that now, her only chance at survival lies in a gambit even riskier than the first.”

Review:
When I first read The Martian, I fell in love with Weir’s sense of humor.  His dry wit matches up well with my own sense of humor, so I was dying to either reread The Martian or pick up something new of his!  Luckily, he released another book!
1. The plot.  This book takes place in Artemis, the small town that has been built on the surface of the moon (in the Sea of Tranquility where the lunar landings took place).  We follow Jasmine, a resident of the town for basically her entire life.  She gets involved with some large scale illegal deals which complicate her life more than it already is.  In the beginning, it was kind slow.  However, all that exposition is worth it.  The plot begins at a trickle and, before long, is a full-fledged disaster with excitement at every turn.  I also loved how real it was (not real in the sense that we actually have people living on the moon, but human nature real).  You will have criminals in every society and you do need those criminals every once in a while.  The cycle of society is also mentioned which I loved.

“On a scale from one to ‘invade Russia in winter,’ how stupid is this plan?”

2. The characters.  Like I said above, all the exposition is completely worth it.  We get to know a group of characters relatively well.  Throughout the book, we are also given glimpses into Jasmine’s life as a smuggler and how she got started with her whole enterprise.  These glimpses into the past were welcome breaks from the action and really help the reader to understand Jasmine more.  I especially loved the ending, when most of the known cast comes together.  Seeing them interact with each other was the best moment!  Additionally, while I think there was a bit of a lack of wit at the beginning, by the time Weir settled into the story, the characters (especially Jasmine) were displaying sparkling wit at every turn.  A bit of a caveat with the humor: if it’s not your kind of humor, then it reads (honestly) as crass and immature.  Personally, I enjoyed it for the most part but if it isn’t your thing, it won’t be enjoyable.

“The overstimulated kids were literally bouncing off the walls. Lunar gravity is the worst thing to ever happen to parents.”

3. The setting.  This is a distinctly different setting than anything I’ve ever read (I think I’ve only read maybe one other book that takes place on the moon) so it was such a nice change of scenery.  Everything is explained in detail.

“I envy one thing about Earthers—they get much faster internet.”

4. The technicality.  Another quality I love about Weir’s writing is his ability to weave in technical information and solutions in his writing.  I understood more from The Martian because I’m studying to become an environmental biologist, but it was still amazingly cool to hear about exactly how this certain piece of machinery works and how Jasmine worked out a plan to either make it or destroy it.  Weir is also careful to keep the technicality to a bearable state so even if you know next to nothing about machinery (like me), you won’t drown in all the specs, but you’ll still give your brain a work out.  This isn’t a mindless read by far.

“But no idiot-proofing can overcome a determined idiot.”

5. The romance.  This is also one of my favorite aspects.  There is no romance.  There’s suggested romance near the end but there isn’t any sort of romance plot line mucking up everything.  In a book like this, there is no need at all for a romantic plot line and I’m so glad Weird forwent what seems like a formality these days.  There isn’t romance in every daring escape or in every action we make, and Weir reflects this perfectly.
The Final Verdict:
A daring venture coated with abundant wit (although it can veer on the side of forced at times) and an excellent exercise for the mind.
4.5 stars