For my last birthday, my parents gifted me with about 35 Agatha Christie books (mainly from the series Hercule Poirot) and I’ve decided to make it my January and February goal to finish all of them and write mini reviews for each of them.  These mini reviews will be published in sets of three in round up posts.  The previous five sections are linked below for your convenience.
Part One
Part Two
Part Three
Part Four
Part Five 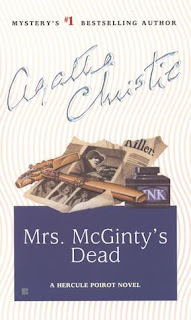 Blurb:
“Mrs. McGinty died from a brutal blow to the back of her head. Suspicion falls immediately on her shifty lodger, James Bentley, whose clothes reveal traces of the victim’s blood and hair. Yet something is amiss: Bentley just doesn’t seem like a murderer.

Could the answer lie in an article clipped from a newspaper two days before the death? With a desperate killer still free, Hercule Poirot will have to stay alive long enough to find out. . . .”
Review:
I really enjoyed this!  There’s a cast of characters at the beginning (at least in my edition) which is really helpful.  There’s also a great twist that becomes completely obvious once you go back and look at all the clues.  As an avid watcher of Criminal Minds, I’m fascinated by the psychology of people and how that factors into decisions on whether or not someone is capable of doing things (mostly murder).  This is one of those cases where Poirot is convinced because of the psychology which is always a fascinating angle to take.  There’s also a bit more humor in this book than I’ve encountered before with Christie’s books which was a welcome change.  It’s a sort of sarcastic and character humor that I love.  There’s a lot more character development for Poirot in this novel and the mystery does a fine job of supplementing our understanding of him.
The Final Verdict:
While it’s one of my personal favorites, I wouldn’t recommend an Agatha Christie newbie start off with a novel like this.  The development of Poirot is spot-on and humorous but it isn’t as crime intensive although your grey cells certainly do have their work out.
4.5 stars 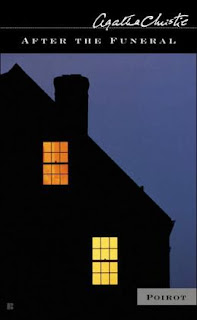 After the Funeral – Agatha Christie
Hercule Poirot #31
Rating: 3.5 stars
Blurb:
“Hercule Poirot is called on to investigate the murder of a brother and sister in this classic from the Queen of Mystery.When Cora Lansquenet is savagely murdered, the odd remark she made the day before at her brother’s funeral becomes chillingly important: “It’s been hushed up very nicely, hasn’t it. . . . But he was murdered, wasn’t he?”Desperate to learn more about both deaths, the family solicitor turns to detective extraordinaire Hercule Poirot to unravel the mystery. . . .”
Review:
This novel has a nice bit of humor mixed in with the crime-solving, making a little more balanced.  I enjoyed the humor immensely and I enjoyed the ending even more.  The mystery itself is really rather well put together and each clue is well thought out.  For some reason, though, it just wasn’t one of my favorites.  I did appreciate the family tree that was included in my edition of the book.  Whenever Christie includes one of those, it saves me brain power in trying to remember names and relationships instead of focusing on the actions and character personalities themselves.  Hercule Poirot does take a bit more of a backseat in this mystery, however, which is perhaps why it just didn’t strike a chord with me.
The Final Verdict:
Well thought out and engaging.  Poirot, however, doesn’t play as big of a role though the humor that surrounds him is spot on.
3.5 stars 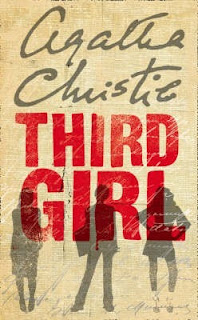 Third Girl – Agatha Christie
Hercule Poirot #38
Rating: 4.5 stars
Blurb:
“Poirot is approached by a girl who shared a flat with two other girls in London. She is convinced she is a murderer. With rumours of weapons and blood stains and no hard evidence can Poirot determine whether she’s guilty, innocent or mad?”
Review:
This novel is mostly interesting because we get to see Hercule Poirot more as the fallible human that the omniscient detective that we have come to know and love.  I actually really enjoyed seeing this side of Poirot and that moment when he puts it all together is a sight for sore eyes.  There are so many seemingly unconnected facts in this case that the reader is able to put together alongside Poirot which makes it extremely enjoyable.  While there were a few little details left unexplained at the end, they were minor and not relevant to the primary storyline.  The story is framed slightly differently than Poirot’s other mysteries because of how it’s presented to him (there’s a bit of a debate whether or not there is actually a murderer on the loose) but Christie rolls with this well.
The Final Verdict:
Enjoyable for the most part with a good look at Poirot as a fallible human.
4.5 stars
That’s all for now!  Have you read any of these books?  What did you think of them?  Who is your favorite detective and would you rather read about detectives who are omniscient or fallible?

0 thoughts on “Agatha Christie Review Round Up: Part Six”