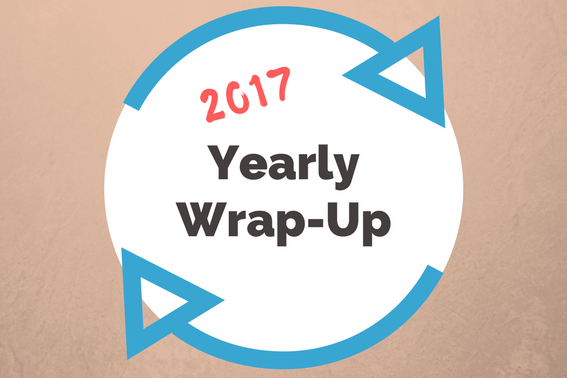 Yes, yes I know I’m terribly late with this but better late than never, am I right?  You know those years where you have all the best intentions to fix all the mistakes of the previous year but then it doesn’t really work out?  Yeah, that was 2017.  I didn’t even get around to posting my resolutions so I don’t really have anything to compare myself with.  Mostly, I just know I failed epically at the two challenges I set for myself in the beginning of the year.  But let’s stop with all the doom and gloom; the year wasn’t all bad.  I had a great rereading stint (even if it meant I wasn’t reading new-to-me books…) which was really great and December was an awesome month for reading.  But let me stop talking at you and show you some stats!

For starters, I read about 5,000 more words than last year which is really great!  Granted, I reread a LOT this year…


I also have a bunch of charts for you!  (but mostly for me because I’m lost without charts…) 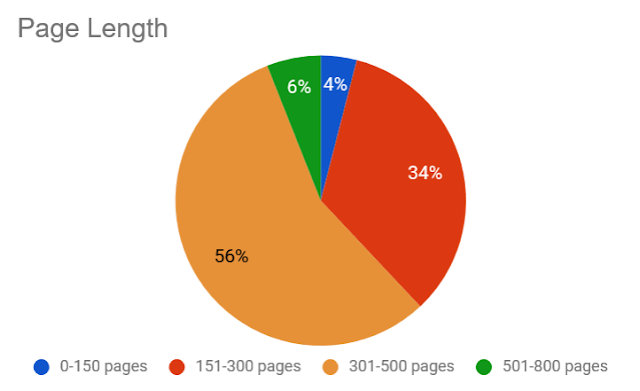 I’m kind of disappointed in myself that I didn’t tackle longer books although it was a crazy busy year for me.  I only read a small, small fraction of books over the 500 page mark (and 500 pages isn’t even that bad!).  I’m hoping to do better this year. 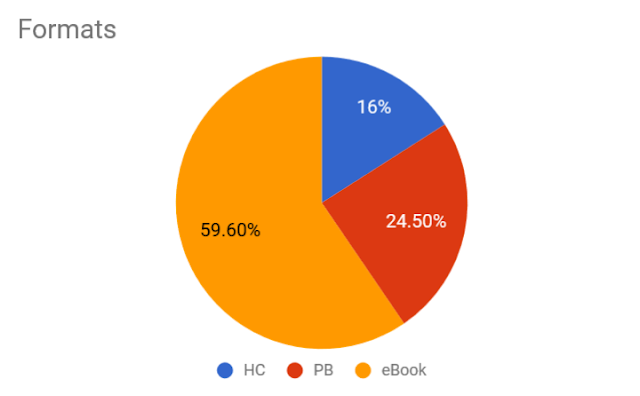 The formats are mostly the same as last year.  I still haven’t gotten around to trying an audiobook yet and I mostly read on my kindle. 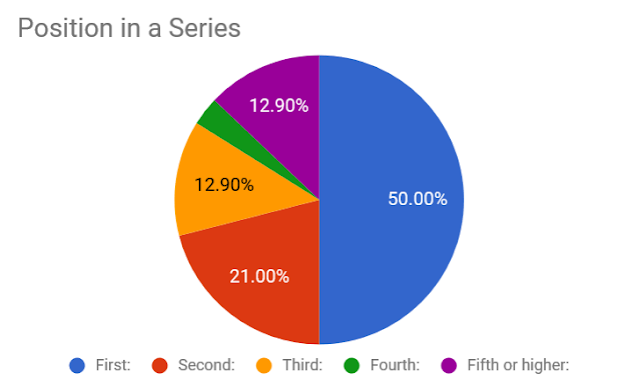 As for the series’, I feel like this is an ongoing problem.  I constantly start new series and then I never finish the series’ that I start!  I get sidetracked by another series and it’s just a horrible cycle.  I have a whole list of series’ that I’m hoping to finish off this year.  I just don’t like finishing series’ and closing off the world for some reason. 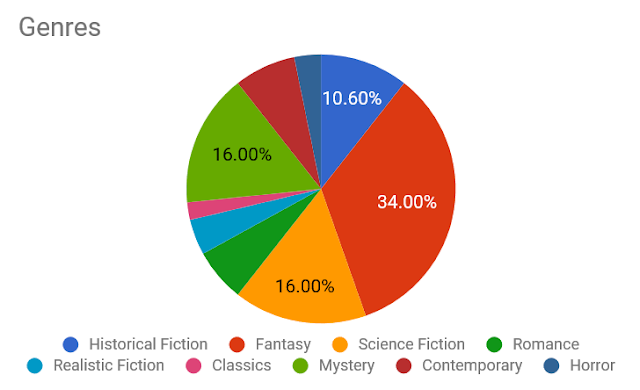 I’m glad to see I have a bit more diversity in my genre selection last year although there’s still a lot of fantasy in there (but how can I abandon fantasy??  It’s the best!).  Overall, I’m satisfied with that spread and I’m going to try and keep up the trend. 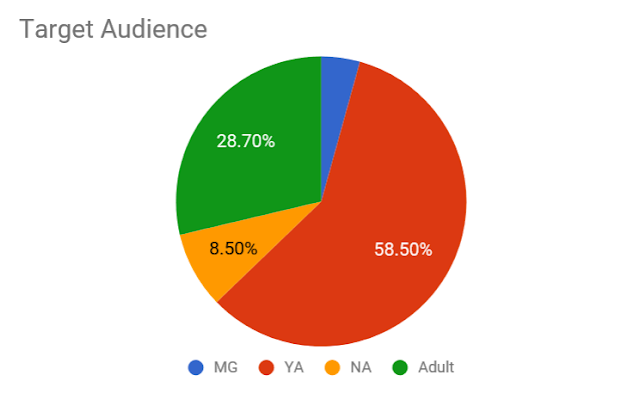 The target audience percentages aren’t surprising at all to me.  I love YA and I think I’ll continue to love it for at least the next five years.  I am slowly introducing more Adult books into the mix too. 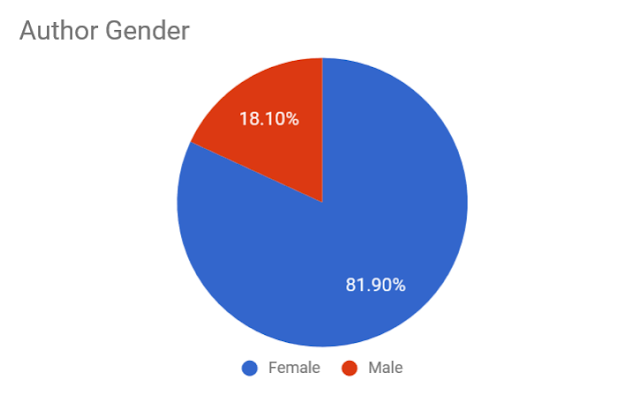 The author spread always surprises me.  I don’t know how I tend to read books by female authors but that’s just how it ends up.  I have no qualms with it, though.  I do want to read some books by an androgynous author sometime though! 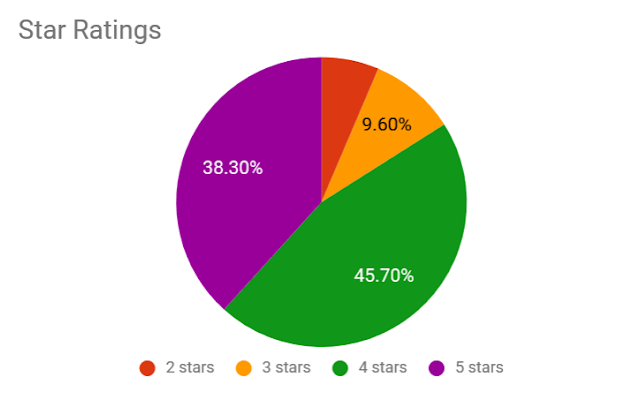 My average star rating for 2017 was 3.97 which I’m kind of happy with.  I’ve been trying to work it down mostly because I feel like I’m always really generous with stars and I rarely ever rate anything 1 star.

But this is exactly what I’m talking about with trying to get my average star rating more balanced!  I tend to rate most books with four or five stars which could mean that I’m just really good at picking books that I know I’ll like, or it could also mean that I always strain to see the good in everything.  I’ve rated a grand total of two books with one star in my entire reading career which is ridiculous.  I’m not sure if I’m committed enough to change this though.  I feel like that would mean changing my whole attitude on life which I don’t want to do. 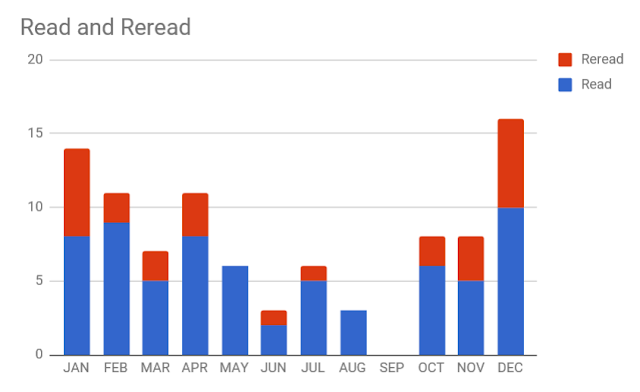 As you can see, the reading catastrophe occurred from June to September.  That’s also about the time that I randomly disappeared from the blogosphere and stopped posting 50/50 Friday’s.  My summer was just insanely busy with trying to keep up with my summer job and taking care of the house while my parents were away.  And then there was preparing for fall semester and then actually transitioning back to uni which was a little rocky.  So those months were not good months.  I think I redeemed myself a bit in December although it wasn’t enough to make my Goodreads challenge (68/100 without counting rereads).

Some notable ones include:

This was one of the most atmospheric books I read during 2017!  I remember laying on the floor of my room for hours reading this, not even taking a break for food because I was so enraptured.  The sequel comes out at the end of May and I’m so excited!

A Court of Wings and Ruin – Sarah J. Maas

A Court of Thorns and Roses #3

Ah yes, this year marked pretty much the end of Feyre and Rhysand as protagonists and I’m sad to see them go.  Of course, I’m so excited for A Court of Frost and Starlight (that title though!!) but we won’t be seeing them as main protagonists in full-length books anymore.  They’re final full episode went off almost without a hitch (except for that fake death at the end… what the heck, SJM?  While I didn’t want them to die, I almost would have preferred an actual death.  This is the perfect time for an Allegiant moment if you know what I mean!).  I’ll definitely be rereading this series (and hopefully actually writing a review for the middle one, ACOMAF)!

18 Hours to Us – Krista Noorman

I’ve been reading and reviewing Krista Noorman’s books for the better part of four years and it’s been such a pleasure working with her.  I’m never disappointed in her books and she writes such lovely, fluffy (but with a hint of spice) contemporaries that I adore.  This is her newest book that I was fortunate enough to receive an ARC of.

Among the Flames – Shelby K. Morrison

Legend of the Liberator #2

I’ve also established a relationship with this author and I’ve read the first book in the series as well and I have to say, I immediately fell in love.  This is one of the hidden gems that you always dream of finding.  The second installment didn’t disappoint and it’s one of the newest additions to my fantasy favorites.  This is also one of my few solid 5 star books in 2017 (books rated 4.5 stars are rounded up in the statistics and many of my rereads are 5 stars).

The Fate of the Tearling – Erika Johansen

The Queen of the Tearling #3

This is one of those series’ where you either love it or hate it and I absolutely loved it.  This is the final book of the trilogy and I have to applaud the author for a perfect ending.  It’s far from picture perfect and takes a turn you wouldn’t expect but strangely, it’s rather wonderful.  Kind of like the ending of The Handmaid’s Tale where it’s not the ending you were hoping for but it’s perfect all the same.  I loved this trilogy so much I bought a hardcover copy of it and I’ll be rereading it very soon!

And there you have it!  I’ll be posting my 2018 resolutions and challenge wrap-ups/goals (I know, I’m so late!!) in about a week.  I already have them written in my notebook so I’m a little more organized than last year.

How did your 2017 pan out?  Did you meet your Goodreads goal?  Do you tend to read more male or female authors?  Do your reading tastes focus on a few genres or are you like me with basically everything?  Are you also intimidated to start large books?  How do you feel about having a high average star rating?  What’s your average star rating?  And do you have my same problem with starting ALL the series’ and then never finishing them?  Let me know down in the comments!