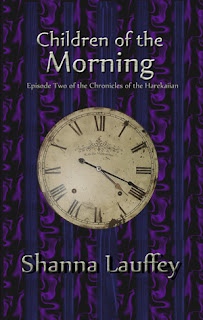 Amazon  Goodreads  Book Depository  Barnes and Noble
Chronicles of the Harekaiian #2
Review of #1
Blurb:
“The Time Shifters are in danger. Someone wants what they have and are willing to kill if necessary to get it.Akalya couldn’t hide in the past forever. The time has come to untangle the threads of a conspiracy so sinister that her very life hangs in the balance, as well as the lives of all of her kind.Compelled by her promise to help Marcus, the half-breed, to learn to control his abilities, Akalya is conflicted by the need to go underground to elude the rich entrepreneur who continues to seek out others of her kind that even Akalya doesn’t know about, and the mysterious researcher working behind the scenes who already came too close to dissecting her best friend.Akalya cannot leave, but she cannot stay. Most of all she must see that no more of her kind breed mutants like Marcus, who could become a danger to them all.”

Review:
Thank you to the author, Shanna Lauffey, for gifting me with a copy of Children of the Morning.  All opinions expressed are my own.
I read the first book in this series a little while ago and I enjoyed this one a little more.  I’m just really getting into this series!  There’s still some vagueness like what I mentioned in my first review but it’s remarkably better and everything is more distinct.
1.  The characters.  We keep the same cast of characters as in the first book and there aren’t any more significant one’s added which allowed the author to really dig into the existing character’s personalities.  In the first book, they were just barely shaped but in this next installment, they’re so much clearer.  I finally began to really understand the main character, Akalya, and her frame of mind.  I find it’s best to get to know characters through simply immersing with them in their own story and the author did a fantastic job of doing that with her.  There are passages before the start of each chapter that are in Akalya’s voice (first person) which really emphasized her time traveling abilities (they are written as though it’s all in the past while currently in the future if that makes any sense) and her personality and also offsets the rest of the book which is in third-person omniscient.  There still remains a bit of shadow and murkiness around the two villain’s, though, and their personal motivations.
2.  The plot.  This installment is probably my favorite so far because of much we get to know about Akalya’s time shifting abilities and we get to watch her shift through time and distance repeatedly and in quick succession.  The plot is mainly about neutralizing/delaying the threat that the two villain’s pose for the Time Shifters (they are capturing them and experimenting on them to gain a better understanding of their abilities and whether it can be taught or transferred to other people).  Once you get used to the constant shifts in time and wrap your brain around what’s happening, it’s really enjoyable and slightly addicting.  Personally, I haven’t read that many books about time or time travel and honestly, it doesn’t seem like there are many out there.  Suffice to say, this series is a good addition to the small subgenre.
3.  The romance.  This is one of my favorite parts of the whole book.  Yes, there is romance, but Akalya has lived with suspicion her whole life so consequently, there is no instalove in sight.  It’s more of a slow burn romance; one where Akalya wants to learn more about Marcus before getting involved with him, even if she was attracted to him from the very start.  This serves as such a testament to both their character’s and speaks to their motivations which I really enjoyed.
The Final Verdict:
While there is still some murkiness present that transferred from the first installment, the romance, character development of the MC, and the plot are all brilliantly executed.
4 stars

0 thoughts on “Review Wednesday: Children of the Morning by Shanna Lauffey”