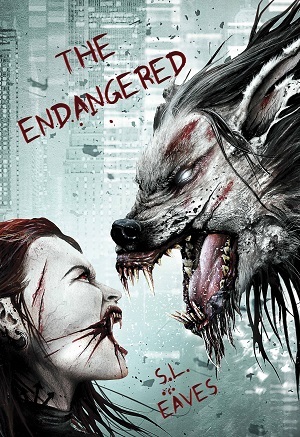 Amazon  Goodreads  Barnes and Noble
Goodreads Blurb:
“S&D Industries is a prominent pharmaceutical company based in New York. It has, for many years, appeared to exist only for the benefit of humanity, and this year’s chief product seems no different. The company’s CEO, whom we know only as Striden, announces the imminent delivery of a powerful flu vaccine. The true purposes of S&D are anything but philanthropic, however. The newly-engineered drug does not protect against flu. It turns people into werewolves.

The only group which stands a chance of resisting this change is a population of vampires. The foremost of them, who go by the name of The Endangered, are determined to turn back the mass werewolf infestation. Among them are an ambitious rebel named Catch and Lori, Catch’s newly-turned protege. Catch has brought this treacherous world to Lori’s doorstep and both their worlds are turned upside-down in the process. Secrets are exposed, alliances are formed. Blood is spilled as the vampires must do everything in their power to preserve both their own kind and that of their food supply.

Review:
Thank you to Whitney at Zharmae Publishing Press for gifting me with a copy of this book in exchange for an honest review!
Okay so I don’t mean to but I was unconsciously comparing this book to Twilight as I was reading it and afterwards when I was putting this review together.  I think that’s just going to be how it’s going to be for every book containing vampires and werewolves in general now.  Bleh.  I found it interesting that in Twilight, the werewolves were the protectors of the humans while in The Endangered, it was the other way around.  The vampires are protecting the human race while the werewolves try to rule them.  It was nice to see a change in roles.
One thing that bothered me quite a lot actually is how Lori’s change is documented.  It seems very disjointed with Catch explaining what they are and then all of a sudden, Lori just accepts it and moves to London.  I would have thought she would have had a harder time accepting that the supernatural is real and all.  Catch basically dumped almost everything on her right away and that was that.  It was all very anticlimactic if you ask me.  Sort of going along with that, the ending seemed kind of anticlimactic as well.  I realize it was a big deal and all but I just couldn’t jump on the train – it left me in the dust.  As the book neared it’s end, everything seemed to be on fast-forward and the author almost seemed to get tired of writing with the kind of detail that they did in the beginning.
I really loved getting to know all the different main characters although I wish Marcus would have had more page time (I was about to say screen time *facepalm*).  He was such an intriguing character for me almost like Magnus in the Mortal Instruments series.
I actually really loved the whole company thing and Adrian’s research that left puzzle pieces.  It was such a different approach to take when you think about a supernatural race trying to rule the world.
The Final Verdict:
While this book seemed to get more and more disjointed as it went on and the vagueness of certain events, I really liked the change of pace with the roles of the vampires and werewolves.  The company idea was also very nice.
3 stars
Quotes:
“My eyesight had been vastly improved.  I’d tossed my contact lenses.  I have to admit there are some perks to vampirism.”
“The summer night is masked by a brisk autumn breeze.  We are heavily equipped with all the James Bond gadgets we could muster.  And a few weapons.  Just in case.”
“‘Hey Marcus, got a present for you.’ The vamp lands at Marcus’s feet with a thump.
‘She’s back and she’s bearing gifts,’ laughs Xan.”
“Dade and I are on his heels, watching the bystanders, looking for anything abnormal and trying not to raise many eyebrows in the process.  Which is damn near impossible given that we look like a team of Navy Seals.”
“‘Just because we are fighting something evil doesn’t make us good.  All I’m sayin’.'”