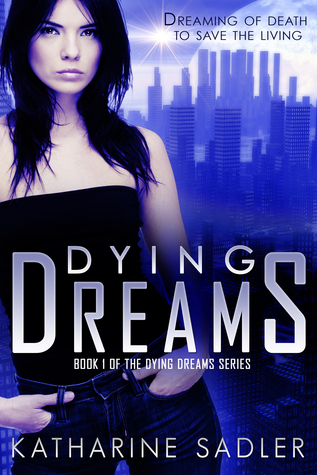 Amazon  Goodreads  Barnes and Noble
Goodreads Blurb:
“Liza Simmons has just learned she is a banshee who dreams of death. Problem is, the government knows what she is and they want her to work for them, touching dead bodies and dreaming of how the victims died. In 2070, in a world ravaged by climate change, the fae have few rights and Liza doesn’t have any other options than to do what the government wants.

Agent Sloane Rice works for the supernatural protection agency, or SPA, and it’s his fault the government knows what Liza can do. He convinces her to sign on with SPA as an agent to avoid becoming a government science experiment. Liza works with Rice to find out why several mermaids have disappeared or died in recent weeks.

During their investigation, they uncover a larger crime and a possible fae rebellion. They both know they need to focus on the job and ignore the mutual attraction growing between them, but trying to fight it may get them both killed. Especially when the fae rebel behind all of the recent violence discovers that they are on his trail.”

Review:
Thank you to the author, Katharine Sadler, for gifting me with a copy of this book in exchange for an honest review!
Let me just start off by saying I really liked getting a glimpse into this post-dystopian world.  It was so interesting to see what had changed and what had caused the change.  I do wish there was a bit more world building but considering it’s our world and Liza doesn’t really know much about the supernatural part yet it isn’t much of a concern.
I really liked Liza and Sloane’s relationship.  Without spoiling anything, let’s say that they are forced into a physical relationship and have to handle it.  I really liked how the author didn’t have them falling in love or anything right away and instead focused on the physical while keeping the feelings of both parties realistic (for example rebellion against the forced union).  I’ve read too many books where the characters just fall in love right away when they spend a lot of time together.
I also liked the explanation for the merging of the two worlds – ours and the fae’s.
There were multiple POV’s in this book and they were done rather well.  There are indications as to what chapter is in what character’s perspective although you could tell for the most part.  Some of the voices sounded a bit similar however and some of the transitions didn’t happen at the optimal times.
The dramatic ending was pretty darn awesome.  The closing lines were perfect for creating the hint of suspense that makes you want to read the next book.  The action scenes are very well written and keep you flowing at the right speed and the rest of the scenes are appropriately… flowing… I’m sorry I can’t seem to find the words for it.  You know when you start reading faster and faster because the character’s thoughts are moving faster and faster and the action is picking up?  And all of that slows down when there’s a slow scene happening?  Yeah, that was good.
The Final Verdict:
A very good dystopian/fantasy book that does pose some new ideas and actually portrays the government as part of the problem (which was so refreshing).  The flow was quite excellent although the shifting between the POV’s could use a bit of clean-up.  There is some slight adult content in this one (although nothing really explicit).  Just a forewarning if you don’t like that sort of thing.
4 stars﻿
Meet the Author: Katharine Sadler

Goodreads
Katharine Sadler lives with her husband in North Carolina. She’s been writing since she was ten and has wanted to be a writer even longer. When she’s not writing or otherwise gainfully occupied, she reads like it’s an addiction, exercises, skis whenever she gets the chance, and adds more books to her Amazon wish list.
Website: http://www.katharinesadler.com
Interview:

1.     What is your favorite part about being an author (or just writing in general)?
I love pretty much everything about it. I love creating a world and filling it with characters and creating their conflicts, their dreams, and their passions. I love looking back at that creation (rough draft) and trying to improve it, trying to really bring the story to life. I love the challenges and, sometimes, I hate the challenges, but I wouldn’t want it any other way.

2.  Where did you get the inspiration for Dying Dreams?
I honestly don’t remember. Is that terrible? I’m pretty sure it started with the idea of a character who could dream how people died and I’d also probably wanted to write a book set in a post-climate-change world, so I put the two together. I love giving characters supernatural abilities that are as much burden as gift, then seeing how they deal with it. I usually get an idea and just let it simmer in my brain for months or years, before I start putting anything on paper, so it’s hard to remember where an initial idea or inspiration came from.
3.  What’s your favorite genre to read?  Why?
I love reading, and I have so many favorite genres. I love the classics, particularly from the Victorian period. I love horror, especially if it involves zombies, and I’ve recently discovered that I love romances. Fantasy has always had a special place in my heart. My dad introduced me to fantasy when I was kid and we read all of the Anne McCaffrey Pern books together. There is just something so magical about entering a world created entirely by the imagination of the writer, and meeting the people who so realistically populate the world. I’m loving writing urban fantasy right now, but some day I’d like to try world-building on that level.
4.  What’s the best advice you can give someone dealing with writer’s block?
Just write. That probably sounds like I’m trivializing the issue, but I really believe that it works. I think the hardest part about writing is overcoming the self-doubts and just putting words on that blank page. It’s a bit like leaping off a cliff, I think. I am never quite sure that I won’t spend three months putting words to paper and end up with something terrible. In the end, though, it’s never a waste of time, because I’m getting closer to my goal, even if I have to scrap 90% of what I’ve just written. So, I think, if you’re dealing with writer’s block, just write. Even if you just write a detailed description of a daisy, maybe you’ll spark an idea in yourself and everything will flow for a little while.
5.  What was your favorite book as a child?
What age? What genre? J I had so many favorite books, it’s really hard to narrow down. The Little Match Girl, The Lonely Doll, Anne of Green Gables, Anne McCaffrey’s books about Pern, C.J. Cheryh’s Rusalka, Wuthering Heights, Dune, Anything by R.L. Stine or Christopher Pike, The Secret Garden. I could go on.
6.  If you couldn’t be a writer, what would be your next dream job?
Something dealing with books for sure. I think I’d like to be an editor or work in a bookstore or a library.
7.  Do you have any bookish pet peeves?
As a reader, I can forgive a lot of grammatical errors and even larger errors, as long as the story and the characters hold my interest. Even so, tag lines other than “he said”/ “she said” really annoy me.
8.  Dying Dreams is your 5th book to be published.  Was it any easier to write/publish with the experience?
One of the things I love most about writing/ publishing is that there is always more to learn, there are always new challenges. At this point, I feel that I’ve grown as a writer and some things are easier, but it’s still just as hard to sit down in front of that blank page and start writing every day. Every new book is a new challenge. Dying Dreams is the first of my books I’m actively trying to market and I feel I still have so much to learn about marketing and creating a brand.
9.  Any advice for aspiring writers?
Write every day. Even if you just write a scene you never use, or a description of a windowpane, every moment you spend writing you are becoming a better writer. Also, read every craft book you can get your hands on.
Thanks for the interview Katharine!
﻿