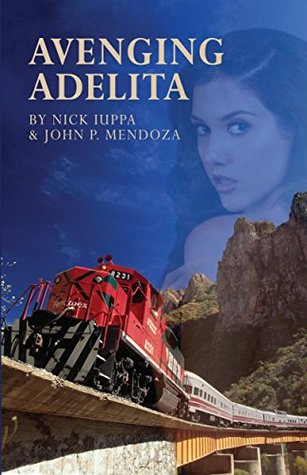 Goodreads Blurb:
“A tender romance with a ticking time bomb at its heart.

There’s a bomb on this train. It will explode before you reach your final destination…because you murdered my wife. University professor Tom McKeever has just lost his wife Adelita to cancer. But the more he thinks about it, the more he realizes she didn’t have to die. The faculty and administration of the university where he teaches in Mexico played a major role in causing her death. Now, Tom relives powerful memories of his life with Adelita as he and the rest of the faculty take a train ride into the mountains. He plans to gain revenge by blowing up the train, killing all those who have wronged him and everyone else on board… including himself.”

Review:
Thank you to the authors, Nick Iuppa and John Mendoza, for gifting me with a copy of Avenging Adelita in exchange for an honest review!
I’m going to start out with the structure of this book.  This book  is set exclusively on a train (in the present tense) with flashbacks into Tom’s past with Adelita.  As the book progresses, you get a better sense of the situation and what exactly happened to lead Tom to want to murder his colleagues and superiors.  It’s somewhat akin to a mystery novel in that sense.  It certainly kept me engrossed until the last page.  I genuinely wanted to know what would happen at the end: whether he would blow up the train, killing himself and everyone else in the car, or whether he would find some way to dismantle the bomb.

I really liked the new perspective that the flashbacks gave to the story.  They gave the right information at the right times so you weren’t overwhelmed but you still got to know the whole story.  However, some of the flashbacks could have been placed a bit better or been made more obvious.  For example, I’d get really into a certain scene that was in the present and then all of a sudden I’d be reading about some other place in some other time.  It is made clear within two pages but I just felt like I was yanked from the story.

I did really like how, in telling the story of Tom and Adelita, this book looked into the idea of what really makes a person guilty and deserving death.  This is a decision that Tom has to make by the end of the book and it’s really interesting going on the journey with him.

Before I get to talking about the ending, I wanted to first mention Adelita.  I did like her character although I’m not sure how I feel about her being central to the ‘beautiful wife’ storyline.  It definitely didn’t endear me to her.  However, she did have a very nice strong personality which combated my dislike for that part of her character.

Now for the ending.  Quite honestly, I loved the ending.  I really wasn’t sure how it would end as I was reading which was a pleasant surprise.  Usually, with these kinds of books, you can tell how it’s going to end because who doesn’t like a happy ending?  But with this book, it really kept me on my toes.

The Final Verdict:
An excellent book that examines what constitutes guilt punishable by death.  I really loved the way it is structured with the flashbacks and the ending is fabulous.  However, Adelita’s ‘beautiful wife’ role didn’t sit well with me.
4 stars