Check out my first post (HERE) for a whole explanation on this!  Jenni is hosting this round and she has a linky set up if you’d like to join in!  Check out her blog HERE.
Today’s topic is: most overrated book.

This one was easy!  There’s one book that I just couldn’t stand to read but everyone else on Goodreads seemed to like.  That book is: 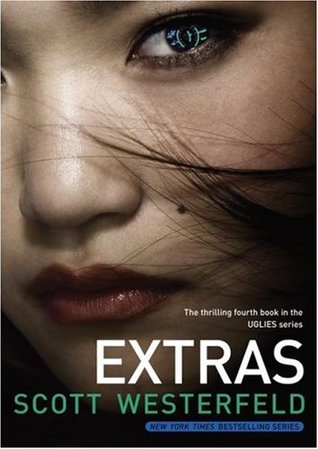 Extras by Scott Westerfeld
Uglies #4
Blurb:
FameIt’s a few years after rebel Tally Youngblood took down the uglies/pretties/specials regime. Without those strict roles and rules, the world is in a complete cultural renaissance. “Tech-heads” flaunt their latest gadgets, “kickers” spread gossip and trends, and “surge monkeys” are hooked on extreme plastic surgery. And it’s all monitored on a bazillion different cameras. The world is like a gigantic game of “American Idol.” Whoever is getting the most buzz gets the most votes. Popularity rules.As if being fifteen doesn’t suck enough, Aya Fuse’s rank of 451,369 is so low, she’s a total nobody. An extra. But Aya doesn’t care; she just wants to lie low with her drone, Moggle. And maybe kick a good story for herself.Then Aya meets a clique of girls who pull crazy tricks, yet are deeply secretive of it. Aya wants desperately to kick their story, to show everyone how intensely cool the Sly Girls are. But doing so would propel her out of extra-land and into the world of fame, celebrity…and extreme danger. A world she’s not prepared for.
I just couldn’t stand to read this book.  This series was originally supposed to be a trilogy but then the author decided to write another book.  This book just drags on and on and on and doesn’t really connect to the other characters.  I just couldn’t stand to read it!  I rated it 2 stars while the Goodreads average rating is 3.59 stars.
What book do you think is overrated?