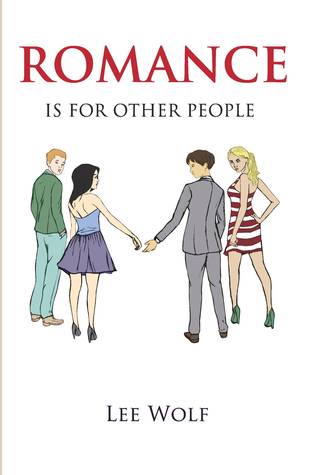 Amazon  Goodreads  Book Depository  Barnes and Noble
Stand-alone to date
Goodreads Blurb:
“Lydia: “You must be sure you have a shot. But you don’t. Romance is for other people.”
Jeremy: “Do you actually think I believe that?”

Chris Howard is content with being “Best Friends Forever” with Lydia Jamison, but Lydia secretly wants to go out with him. Meanwhile, Chris’ older cousin Jeremy and Amanda have a tumultuous love-hate relationship. After a recent fight with Amanda, Jeremy starts pursuing Lydia and refuses to leave her alone.

Lydia is at first disgusted, because Jeremy has been a pest to both her and Chris in the past. Chris doesn’t believe that Jeremy has a chance with Lydia, and does nothing about it. But as Jeremy refuses to give up his pursuit….

Romance is for Other People is a unique novel told from first person from the point of view of two main characters: Chris and Lydia and their experiences with first love and first heartbreak.”

Review:
Thank you to the author, Lee Wolf, for gifting me with a copy of Romance Is For Other People in exchange for an honest review!
1.  The plot.  One thing that’s essential to recognize about this book is that it’s solely a coming-of-age romance and nothing more.  Once you get that through your head, all of the angst that just saturates the plot is sometimes the sole thing pushing the book forward makes sense.  The author made sure that there was always something that was moving forward so it never was boring.
2.  The characters.  Reiterating what I said above, you really have to acknowledge the angst.  At first, I was disgusted with it because I kept thinking ‘why don’t they just talk to each other and act more mature??’ However, that’s my more mature self talking.  Casting my mind back to my middle school and early high school days, it’s entirely accurate.  It’s kind of funny actually, how Lydia and Chris take the round about way to acknowledge their feelings for each other but it also really endeared me to them.  One thing I just couldn’t shake however, was the feeling that Lydia was playing the complacent female.  Just the fact that she considered Jeremy solely because he called her beautiful.  They didn’t even have any actual conversations besides him constantly calling her beautiful.  Another thing that really bothered me is the concept of love that’s thrown around, especially by the older characters (juniors and seniors in high school).  Speaking from experience, if you don’t know how significant love is at the beginning of high school, you definitely do by the end.
3.  The ending.  I simultaneously loved and didn’t love the ending.  While the love thing was all fixed and I it was cutesy and adorable and wrapped up nicely, it was also be presumptuous and unrealistic in my opinion.  I don’t want to spoil anything so I won’t say anything further but the ending in general was a meh for me.
4.  The writing.  The writing in general is very nice.  It’s very to the point with just the right amount of description and emotion.  However, there are more than a few typos throughout the book.  They aren’t simple spelling mistakes but rather replacing his with her or her with my (possessive articles).  This made several passages confusing and I had to read them several times to understand exactly what was happening.
The Final Verdict:
While a very cute and realistic coming of age romance, it could use some editing and tweaking.
3 stars
Meet the Author: Lee Wolf 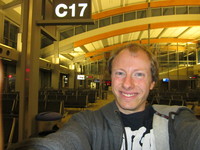 When Lee Wolf was a kid, he first discovered an interest in writing. Homeschooled from kindergarten through high school, this gave him the time to develop fiction at his own pace. He graduated from Durham Technical Community College with an associate in Arts degree, and later graduated from North Carolina State University with a Magma Cum Laude in English. At age eighteen he discovered his other passion, working with kids, when he first started working at Chestnut Ridge Camp and Retreat Center. Becoming a sort of jack of all trades there, he’s helped at the community garden, cleaned and mopped the main dining hall, worked in the kitchen, renovated the back room of the crafts cabin and played with many, many kids. He currently lives in Durham, North Carolina.
Connect:
Goodreads  Website  Twitter
Interview:
1.  How would you describe Romance Is For Other People in 5 words or less?
“Do you love your bestie?”
2.  When did you begin writing?  What motivated you to start?
I begin writing as a young kid.  I just liked coming up with stories.  But I remember as a teenager coming up was the first time I came up an entire outline, including one for what became “Romance is for Other People.”
3.  Romance Is For Other People is about the trials of first love.  As you’ve worked extensively with kids (and, of course, were a child once yourself), were any of the characters or plot points inspired by real events?
I did have two girls who were close friends with me growing up, but beyond that, the story is made up.
4.  Where is your favorite place to write?
I like to write in my bed, first thing in the morning.
5.  What is your favorite part of the writing process?
My favorite part of the writing process: when I’m clearly feeling the emotion of the characters in the scene.
6.  Did you plan out the whole book in advance or did you just sit back and see where it took you?
I planned out the entire story.  There were a few surprises along the way, but mostly I stayed to my outline.
7.  Are there any other genres you’d like to explore besides coming-of-age/romance?  Are you working on anything new?
Yes!  My next book is a young adult Medieval Adventure novel.
8.  Do you have a certain writing goal everyday (word count or otherwise)?
When I write, I try to write 5 pages a day.  When I was in college and didn’t have as much time, I tried to write at least one page a day.
9.  Any advice for aspiring authors?
There are a lot of suggestions of how to write a novel.  Take all of them into consideration, but do what works for you.
Thanks for the interview, Lee!

0 thoughts on “R&R Review and Interview Friday: Romance Is For Other People by Lee Wolf”